NYPD made 250 arrests Sunday after protests over the death of George Floyd in police custody stretched into a fourth day in New York City.

I shot this video at 10:27 PM, second time tonight that this Game Stop had been looted on 14th St. and Union Square. pic.twitter.com/Fzqn11vuel

Protestors in a standoff with police near Union Square. They’re kneeling and telling officers “take a knee” pic.twitter.com/NzDgBhM0UC

Hundreds of protesters took to Times Square, many of them kneeling on the street as police watched on, while in Brooklyn hundreds more walked through the streets of Williamsburg.

But the mayor's assessment didn't sit well with NYC City Council Speaker Corey Johnson, who tweeted, "What?! You aren’t seeing the same thing as everyone else tonight!" 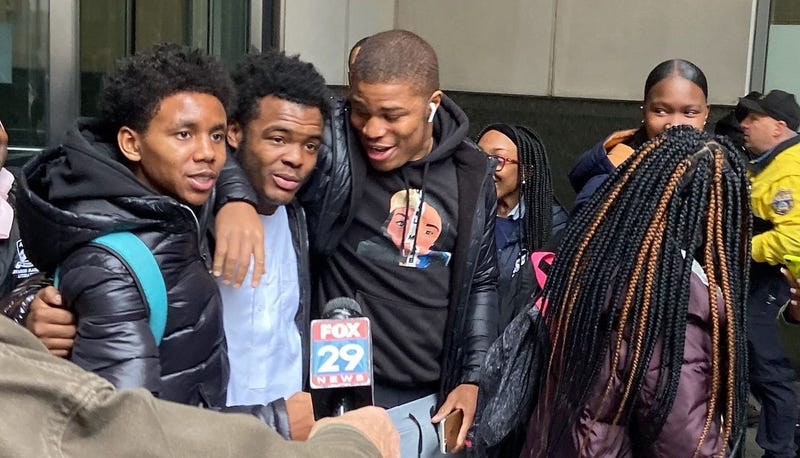 Hours after he spoke, demonstrations resumed. Hundreds of people gathered in downtown Brooklyn, chanting “No justice, no peace,” and “Black lives matter,” while making occasional insulting hand gestures at a line of police officers protecting the Barclays Center.

Maybe 1,000 people at Barclays hearing from dozen speakers spontaneously encouraging open discourse about racism & change re: a system that allows murder by police officers. #protest
My favorite sign: “Accept the things you cannot change? No, change the things you cannot accept” pic.twitter.com/31A6x0I4SD

"We need more of this, to see and hear each other, to work together, to recognize that our differences are our strength," NYPD Commissioner Dermot Shea said in response.

There were multiple complaints about police unnecessarily shoving or bludgeoning protesters and spraying crowds with chemicals.

The NYPD said 345 people were arrested, 33 officers were injured and 27 police vehicles were damaged or destroyed by fire. There were no major injuries reported. Police Commissioner Dermot Shea said some peaceful demonstrations were “hijacked” by people with violent intent.

Peaceful rally @barclayscenter, some sharing their own stories of police brutality, reminding crowd that some fear for their lives every day and to not lose the energy and momentum they have now to make change. #1010WINS #GeorgeFloydProtests #GeorgeFloyd #BlackLivesMatter pic.twitter.com/hZ1Se7DnNx

“We expect additional protests tonight and we’re preparing for such,” Cuomo said at his daily briefing.

Similar protests flared around the nation in response to the Minnesota death of George Floyd. Floyd, who was black, died Monday after a white Minneapolis police officer pressed his knee on his neck until he stopped breathing.