Having put a face to the baseball owners' worst intentions at the worst possible time, John Fisher will always regret at least in some way his decision to take the point. I mean, he'd been a convenient villain in that cartoon cheapskate sort of way, but he'd been outgrowing that, albeit slowly. Team success, even modified team success such as that of his Oakland Athletics, will do that for a fellow.

But then he decided to furlough some low-level (read: vulnerable) workers. Then he decided not to pay rent on the Coliseum for the months that there's been no baseball. Then he decided to eliminate the $400/week stipend the players in the minor league system. Total cost: Maybe $3 million, or approximately 1/140th of his Forbes-guessed net worth of $2.1 billion. 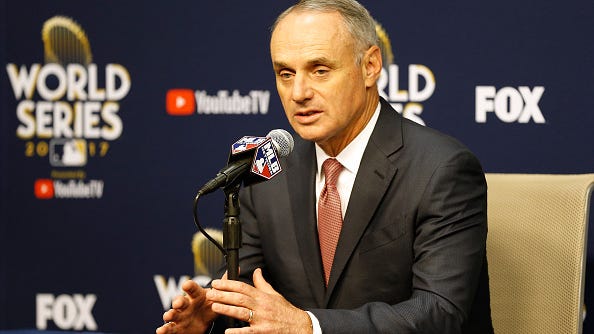 Well, fine and dandy then. An oligarch's gotta oligarch sometimes, especially if the other members of the oligarchy are planning to do the same thing eventually.

And that may be the key here. In deciding to engage the players by offering eminently resistible proposals, the owners may be saying that they can take playing the games or not playing them, because either way they're willing to lose a cuff button on their weekend dress shirts. It's the joy of being a hardliner when it comes to other people's jobs because, hey, you got yours, largely through family money if not outright inheritance.

But by being the first to say, "Hey, I have to squeeze from the bottom because times are hard, at least for people not me," Fisher has become a lightning rod for not only the players' position but also the game's designated tin ear. He is the face of, "Hey, YOU'RE in this together. Of all the blown opportunities this franchise has had in making itself a more central part of the Bay Area's portrait of sport, this is the one that may be hardest to reassemble.

Makes you wonder if he wants to reassemble it at all.

See, Fisher didn't have to be that guy. Other owners are always willing and able to be the pinata. Other owners like the limelight. Fisher has always avoided it as though it were high-level gamma rays from space, which has usually worked to his detriment but hey, not everyone has a tolerance for other people's prying eyes. He didn't have to furlough anyone, or stiff the landlord, or cut off the next group of players after this one leaves. And he definitely didn't have to put his name to that hamheaded "I confess to the murder" letter that will be forever stapled metaphorically to his office door like the 95 Theses.

Instead, he looked after the short money once again, in the addled notion that it was money that could be saved in the longer run. It can't. Everyone is taking a beating on this, now and in the immediate future, and $3 million is a droplet of sweat in the Adriatic Sea. Fisher's play should have been to be the guy who comes out as at least a tepid benefactor both of the city where his factory is located and the game he claims he loves. He should have paid the money and not furloughed the workers; hell, he could have even said, "I'm doing this because I want people to think I'm a good guy" and gotten away with it, because people eagerly fall for even the transparent optic every time.

But Fisher is also nobody's fool, and he may merely be advancing a greater yet no less disastrous  tactical plan. The hint here may well be that other teams are going to do the same thing, either to show the union how serious it is about burning down the factory to preserve it (not play games so as to lose less money than if they had played them before no fans), or in an attempt to frighten the lowest paid major leaguers into accepting an inherently punitive settlement to get back to work when the all-clear is sounded. This may be part of a grander plan for the entire sport — the one of the ownership that wants its sport to be the last to return.

And even if that is a bit too tinfoil hat for your pro-management world, it still stinks of cynicism at the worst possible time even on this orbiting heap of fetid rot. It's bullying for the sake of showing people you can be a bully. It's withholding an amusement people say they could really use these days just for the little money that hasn't fallen down the sewer. It's the baseball decision of 30 years ago, when owners were meant to hate their employees and the customers who loved them.

In any event, John Fisher had a choice — remain comfortably quiet and make a small but beneficial investment in his image and that of his organization, or worry about $3 million, give or take a few gift cards. He chose option (b), a disastrous decision that will mark him for years to come as the easiest caricature of the modern greedhead owner, at a time when there are plenty of others from which to choose.

His only escape, really, is if one of his fellow 'garchs does the same thing, only more shabbily. I'd give it until Friday morning. Someone's bound to turn up. Someone always does.