The story of the Preakness Stakes this year is the horses that are not running in the second leg of the Triple Crown after the controversial finish of the Kentucky Derby two weeks ago.

The official Derby winner, Country House, did not enter the Preakness after coming down with a cough. It’s the first time the Derby champion has not run in the Preakness since 1996. The horse that crossed the finish line first, Maximum Security, also will be absent as his owners pursue a lawsuit in U.S. District Court in Kentucky to overturn the Derby decision.

It’s the first time since 1951 that the first four horses to cross the Kentucky Derby finish line are not at Pimlico. This year’s Preakness winner will be considered nothing better than the "best of the rest."

But there’s still money to be made at the betting window. Here we handicap the field and provide a basic guide to horse racing bets:

1. War of Will (4-1)
(Mark Casse/Tyler Gaffalione)
Finished seventh in the Kentucky Derby and was the horse that appeared to have been impeded when Maximum Security veered from his lane around the final turn. 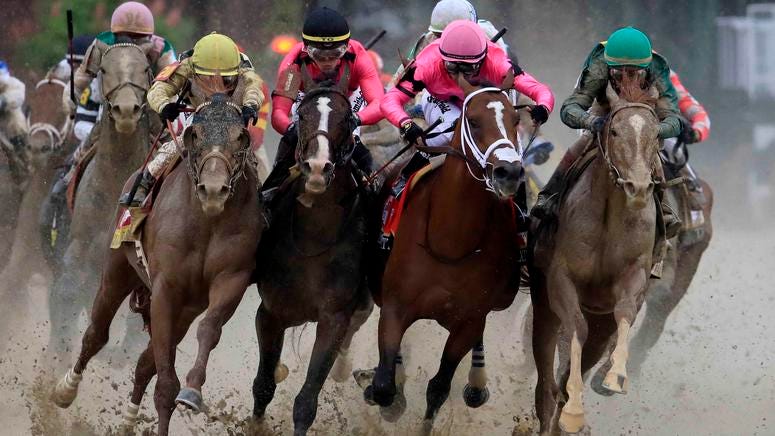 2. Bourbon War (12-1)
(Mark Hennig/Irad Ortiz Jr.)
A "new shooter," as they like to say about Preakness horses who did not run in the Derby. Finished fourth in the Florida Derby in March in his last race.

3. Warrior’s Charge (12-1)
(Brad Cox/Javier Castellano)
Finished first in an allowance optional claiming race April 12 at Oaklawn last time on the track. This is a huge step up in class.

4. Improbable (5-2)
(Bob Baffert/Mike Smith)
Elevated to fourth in the Kentucky Derby after the Maximum Security disqualification, he’s the best Derby finishing horse in this field, which made him the favorite in the Preakness when the odds opened.

5. Owendale (10-1)
(Brad Cox/Florent Geroux)
Another new shooter. Finished first in the Lexington Stakes on April 13 in his last race.

7. Alwaysmining (8-1)
(Kelly Rubley/Daniel Centeno)
This new shooter finished first in his last race, the Federico Tesio on April 20 at Laurel.

12. Anothertwistafate (6-1)
(Blaine Wright/Jose Ortiz)
Finished second to Owendale in the Lexington Stakes in his last start.

13. Win Win Win (15-1)
(Michael Trombetta/Julian Pimentel)
Still has two more wins in his name than he does on the track after a ninth-place finish in the Kentucky Derby.

The minimum bet for these three types of wagers is $2.

Win bet: If the horse you pick wins the race, you cash in. Simple.

Place bet: In order to cash this ticket, your horse needs to finish in first or second place. Does not pay out as much as a win bet.

Show bet: Pays out if your horse finishes in first, second or third place. Even lower payouts.

To make the most money at the track though, try these “exotic” wagers. $1 is usually the minimum bet for exotics, sometimes cheaper.

Exacta: To win this bet, you have to correctly predict the first and second place horse in the exact order of finish. You can pick more than two horses to increase your chances of hitting the exacta, but that also increases the cost of making the bet.

Trifecta: Requires you to predict the top three horses in order of finish

Superfecta: The top four in order of finish. The $1 superfecta paid out more than $400,000 at the 2005 Kentucky Derby. But consider this a lottery ticket.

One last thing to remember: Unlike most sports gambling, in which your odds are locked when you place a bet, in horse racing, the odds are only finalized when the gate opens and the race begins.

How to bet $25 on the Preakness