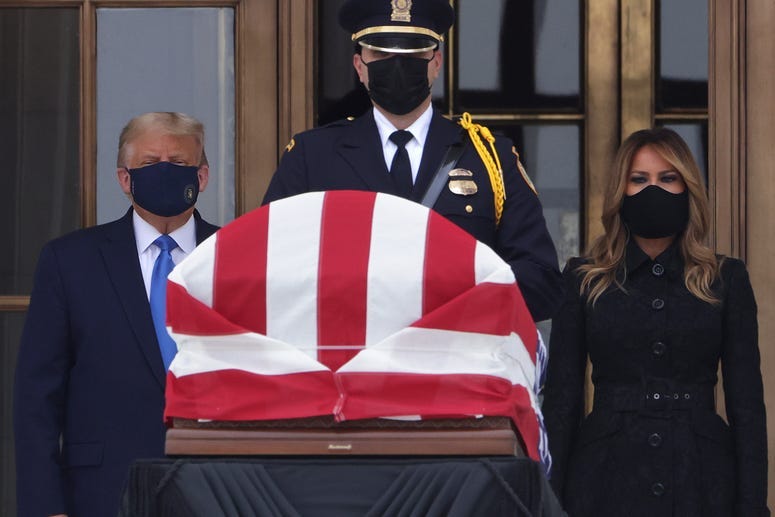 Trump and first lady Melania Trump left the White House around 9:45 a.m. and arrived at the Supreme Court shortly before 10 a.m. They spent a little under a half-hour at the court, where Ginsburg is lying in repose, before returning to the White House.

The Trumps were seen briefly near Ginsburg's casket at the top of the court's steps around 10 a.m. Protesters could be heard chanting "Honor her wish" and "Vote him out."

JUST IN: Pres. Trump arrives at the Supreme Court to pay respects to judicial icon Ruth Bader Ginsburg, as onlookers shout "Vote him out!" https://t.co/Isvic44Ag5 pic.twitter.com/452rZ0hDjA

Chants of “Vote him out!” and “Honor her wish!” outside the Supreme Court as the president arrives pic.twitter.com/lys9EqBuNs

The protesters appeared to be referring to comments Ginsburg reportedly made in the days before her death. She is said to have told her granddaughter that “my most fervent wish is that I will not be replaced until a new president is installed.”

Ginsburg’s flag-draped casket arrived at the Supreme Court, where she served for more than 27 years, on Wednesday morning.

Her former law clerks lined the front steps of the court as her casket was carried up to the Great Hall. Inside, the court's remaining eight justices were together for the first time since the building closed in March because of the coronavirus.

Chief Justice John Roberts spoke beside a portrait of Ginsburg, the leader of the court's liberal bloc, saying "her 483 majority, concurring and dissenting opinions will steer the court for decades."

"The voice in court and in our conference room was soft. But when she spoke, people listened," Roberts said.

After a private ceremony on Wednesday, Ginsburg's casket was placed on the Lincoln Catafalque at the top of the court's front steps, giving the public a chance to pay their respects through Thursday.

Ginsburg died last Friday at the age of 87.

sports
Evan Engram, David Njoku reportedly available on trade market
sports
Texans coach Crennel confirms Houston could be seller at NFL trade deadline
music
Billie Eilish on quarantine: 'If we get the orange man out, maybe we’ll get to see each other again'
music
Drake served up Mac n Cheese with raisins for his birthday, and nobody is here for that
music
Kanye West tells Joe Rogan why his message is misunderstood: 'It’s not a rant. It’s a symphony of ideas'
music
2020 American Music Awards: Complete list of nominations