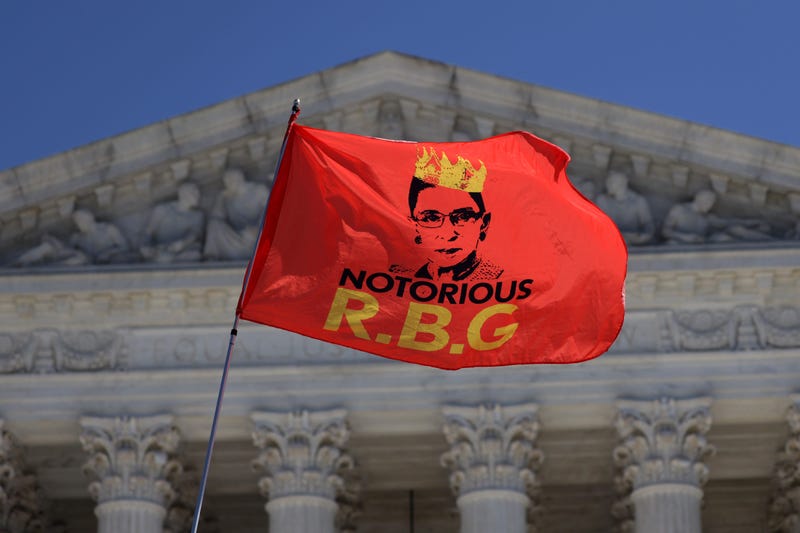 Late Supreme Court Justice Ruth Bader Ginsburg will be buried in Arlington National Cemetery alongside her husband and the men and women she championed.

Supreme Court justices are always given the option for an ANC burial, even if they are not veterans or married to a veteran as Ginsburg was. But Ginsburg's contribution to military personnel went beyond her role as an Army spouse.

Ginsburg has long been an advocate for equal rights for women and LGBTQ individuals -- including service members. Ginsburg was in favor of the recent ruling that protects transgender individuals from workplace discrimination which has positively impacted troops serving under their preferred gender. She also often advocated in favor of veterans' disability cases. And, of course, she opened doors for women in the military in landmark cases that span more than two decades.

In 1970, Ginsburg's legal advocacy pushed the military to drop its policy on abortion.

At the time, women service members who became pregnant had a choice to make -- abort the pregnancy and remain in the service or leave the service and become a mother.

Air Force Capt. Susan Struck was serving in Vietnam when she became pregnant. Her Catholicism prevented her from aborting the pregnancy, but she also wished to remain in the Air Force.

“One thing that conspicuously distinguishes women from men is that only women become pregnant. And if you subject a woman to disadvantageous treatment on the basis of her pregnant status, which was what was happening to Capt. Struck, you would be denying her equal treatment under the law," Ginsburg said years later when she faced her 1993 confirmation hearings.

Struck v. Secretary of Defense made it to the Supreme Court's docket (Ginsburg was a lawyer with the American Civil Liberties Union at the time), but it never made it there before the Air Force, not confident they would win the case in the Supreme Court, conceded.

Soon after, Roe v. Wade revolutionized abortion rights in 1973. Ginsburg said that Struck v. Secretary of Defense could have been what Roe v. Wade became if it had reached the Supreme Court.

Regardless, Struck's discharge was waived, and the Department of Defense's policy on abortion ended.

Women service members married to male civilians was a new concept for the military -- even as late as the 1970s. When Air Force Lt. Sharron Frontiero received her first post-marriage paycheck, she thought the missing housing allowance and medical benefits for her spouse was a mistake. But it wasn't.

Per DoD policy at the time, a woman service member had to prove that her income covered more than half of her civilian husband's expenses in order to receive the same marriage benefits that male service members received, no questions asked.

The district court denied that the DoD's policy constituted discrimination based on sex -- because of the nature of the case, it rose directly to the Supreme Court. Ginsburg argued that the policy violated the Fifth Amendment's due-process clause. Frontiero won the case.

In 1996, Ginsburg helped open the Virginia Military Institute to women.

In one of her most notable moves as a Supreme Court justice, Ginsburg opened VMI to women in 1996, reversing VMI's male-only policy of 158 years.

"There are women who are ready and willing and able to undergo the tough training at VMI and they want that opportunity," Ginsburg said when she returned to VMI 20 years after the landmark ruling of United States v. Virginia which opened the institution to women.

Ginsburg argued that the male-only policy at the university violated the 14th Amendment, describing "a law or official policy that denies to women, simply because they are women, equal opportunity to aspire, achieve, participate in and contribute to society, based upon what they can do" to be "presumptively invalid."

Ginsburg did give the state-funded institution the option to become a private university if it insisted on remaining male-only. Today, a little more than 10% of VMI's student body are women.