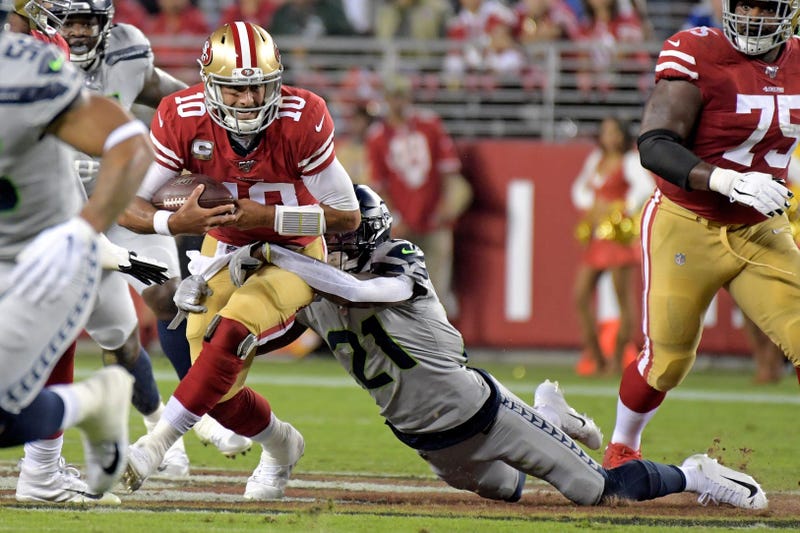 For the first time since Dec. 3, 2018, the San Francisco 49ers lost a football game. For a team that ended 2018 with a 4-12 record to go 343 days without losing should be taken as an accomplishment — but not on Monday Night Football in Santa Clara.

The primetime tilt was classified as the biggest game in the history of Levi’s Stadium and it lived up to that label. The 7-2 Seattle Seahawks vs. the undefeated 49ers on Monday Night Football. Every box was checked.

Throughout the 2019 season, the 49ers have been able to weather the storm in sloppy games. They’ve dealt with injuries and they’ve made their mistakes, but each game they've been victorious.

The bend, not break mentality has been a staple of the 49ers season until — until Monday night.

“We had too many self-imposed mistakes that hurt us,” said Jimmy Garoppolo. “When you put yourself behind like that it’s hard to catch up.”

The mistake-laced game couldn’t come at a worse time for the 49ers. This was the game of the year. The national audience was paying attention. It was against your rival on Monday Night Football. This was the game to earn respect across the league.

One loss is all it takes for the question marks surrounding the 49ers to creep back up.

The 49ers missed more than a moment for a “signature win.” This could’ve been a passing-of-the-torch-type moment in the NFC West.

Yes, they played their toughest opponent of the season. Yes, they were shorthanded. But this game came down to mistakes by the 49ers.

Turnovers, drops and bad offensive line play stifled the flow of what turned into a choppy game.

The 49ers racked up 6-plus drops in the game. Many drops came on devastating drive-ending plays.

Garoppolo called the mistake-laced loss a “reality check” for the 49ers.

The 49ers opened up the game in dominant fashion. After the first quarter, the 49ers had a 10-0 lead. They limited Russell Wilson and the Seahawks to only 3:34 time of possession. Things went downhill from there.

In the second quarter, Jadeveon Clowney picked up a Garoppolo fumble for a scoop-and-score touchdown. Kyle Shanahan brought up this play specifically as a “huge turnover” that “changed momentum."

The Seahawks created four turnovers against the 49ers leading to 21 points.

Even with a bevy of mistakes, the 49ers were in the game until the final seconds. This felt like the type of game the 49ers have been able to steal all season. Against MVP-favorite, Wilson things are different. Every mistake is worth more.

The 49ers are facing their first taste of defeat in 2019. How they respond will set the tone for the final stretch of the regular season.

Richard Sherman said the silver lining is that they will learn more from this loss than they would in a win.

“I expect it to be a phenomenal bounce back,” said Sherman. “The coaching staff will be great about it. They’ll correct it and guys will be locked in.”

The 49ers have a game in six days against Kyler Murray and the Arizona Cardinals. After that, they face their toughest stretch of the season. In three straight games, the 49ers play three straight Super Bowl contenders — the Green Bay Packers, the Baltimore Ravens and the New Orleans Saints.