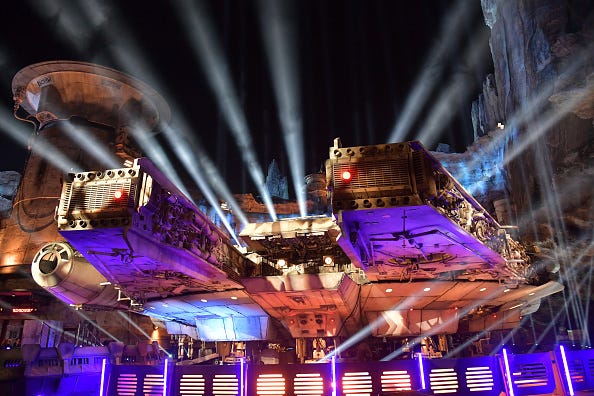 As if there wasn’t enough to keep you occupied at the famous Disneyland Resort in California, now, fans will have an entire new world to explore. "Star Wars": Galaxy’s Edge will be opening up Friday, May 31st.

The new lands will be a "Star Wars" fanatic’s dream, complete with 14 acres of structures and attractions that will look extremely familiar to diehards. The landscape is complete with ships, droids, and blaster marks.

According to USA Today, the craziest part about the whole attraction is that you won’t feel like you’re in a theme park. It’ll actually feel like you’ve transported to a galaxy far, far away – just with a lot of kids and families running around.

Find out what it’s like to live day-to-day in the camp of the Resistance, which features starfighters fresh from battle parked on the outskirts.

The most exciting of the many exhibits opening up on Friday is the Millenium Falcon, which serves as a centerpiece for the "Star Wars" area of the park. Visitors will be able to get up close and personal with the iconic ship for photos.

Only 10 more days until #StarWars #GalaxysEdge at #Disneyland opens! As you can see, the Cast is ready to welcome you to Batuu. | 📷 via @joshdamaro, President of the Disneyland Resort

There’s also Savi’s Workshop, which offers a space for visitors to build their own light sabers for the price of $199.99 per guest. If that seems like too big of a hit to your wallet, you can create your own droid for $100 less.

The magic of the park is in the details, with mysterious animal prints, sounds of battle, dents, bumps, and bruises all intricately placed to make fans really feel like they’ve traveled through galaxies. They've even included specially shaped Coca-cola bottles to really complete the experience.

Coming soon to a galaxy near you: specially designed Coca-Cola bottles will be available exclusively at @StarWars: #GalaxysEdge beginning May 31 at #Disneyland and August 29 at @WaltDisneyWorld!

The park wouldn’t be complete without several pre-staged photo-op locations. Fans should bring their iPhones and portable chargers if they want the most material for their next Instagram post.

"Star Wars": Galaxy's Edge is set to open a second location on August 29th at Walt Disney World Resort in Florida, according to Disney World.