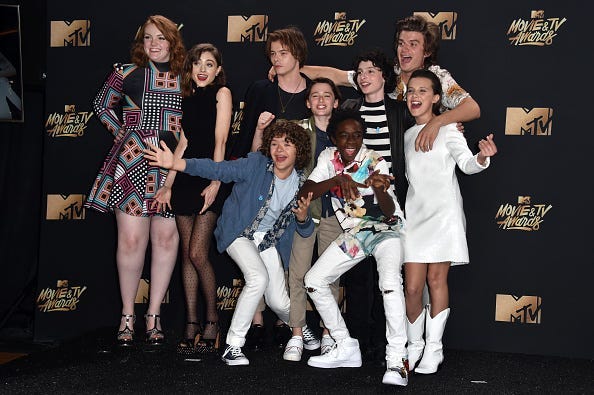 As if the trailer and Baskin-Robbins ice cream wasn’t enough to get you excited for the season 3 premiere of "Stranger Things," Netflix just released a new ‘80s poster for the series.

The neon lit image – which has a similar liking to the recent "Avengers: Endgame" poster – features all members of the main cast under the tag line, “One summer can change everything.”

Taking center stage is Eleven, played by breakout star Milie Bobby Brown, sporting a hair scrunchie and bloody nose while extending her arm to use her powers.

To her right is Eleven’s boyfriend, Mike Wheeler (Finn Wolfhard), followed by the rest of the residents of Hawkins, Indiana.

The poster also showcases the signage for the town’s Starcourt Mall, which is where a lot of the action will take place this season.

Towards the bottom, a monstrous, Demagorgon-like creature lurks, surrounding the show’s title, as bad boy Billy (Dacre Montgomery) appears under the ghoulish figure with dead rats splayed out all over the ground.

Billy's position below the monster has some fans speculating this could be a clue that his character will wind up in The Upside Down.

While viewers will have to tune in to find out Billy’s fate, a trailer for the series released last month showed the hunky actor enjoying his moment in the sun strutting shirtless around the town pool.

For the first time, the series will not be set in the fall, as season three unfolds during the summer of 1985.

“We would say that this is our most unapologetically fun season," show creators, the Duffer Brothers, told EW. "Yet at the same time, it is also our most horrifying and intense season. “

Fans can finally get in on all the action when "Stranger Things" begins streaming July 4th on Netflix.