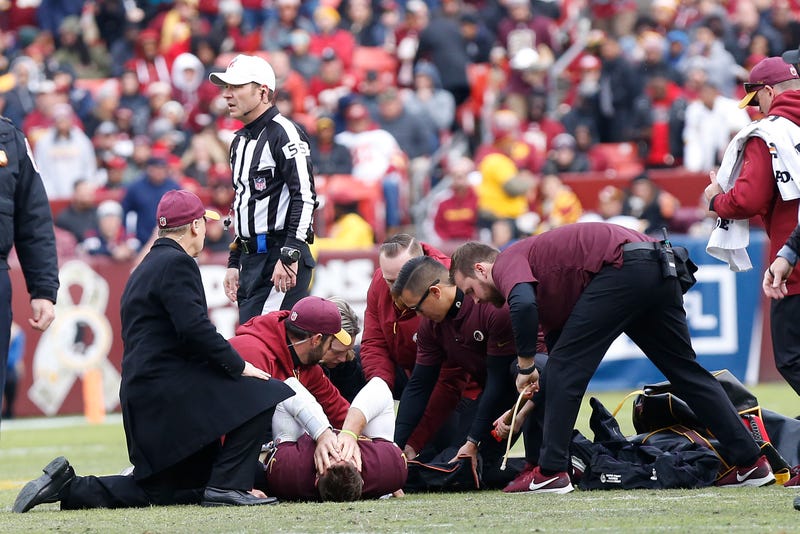 According to Bickel, Smith is suffering "devastating complications" from the initial surgery on his broken leg and has undergone multiple subsequent surgeries to combat infection.

Smith first underwent surgery Nov. 18 after suffering a compound fracture after breaking his tibia and fibula in Week 11 against the Texans.

Hearing from several different people over last few days that Alex Smith is having devastating complications from his broken leg surgery battling infection. Supposedly he's had multiple surgeries to try to combat infection. Chances of him playing again in real jeaopardy.

NFL Network's Ian Rapoport later reported it is "premature to say what this means for his playing future."

More on #Redskins QB Alex Smith: He’s had several procedures, sources say, and @MikeGarafolo adds they are removing tissue to clear the infection. Smith still approaches this with optimism about playing. Note: His hospital room was next to Colt McCoy’s during McCoy’s 1-night stay

David J. Chao, a former NFL head team doctor and practicing orthopedic surgeon, tweeted infection is always a worry with an injury like Smith's, but surgery and antibiotics mean it "is rarely a long term complication."

#AlexSmith
Infection always a worry with open fracture (where bone pokes thru skin from inside out), but with quick surgical action and antibiotics, osteomyelitis is rarely a long term complication. https://t.co/u4YAsnjfkR

The Redskins released a statement Thursday thanking fans for their prayers and asked for "everyone to please honor the Smith family's request for privacy at this time."

Statement by the Washington Redskins: pic.twitter.com/SROL4sPVFM