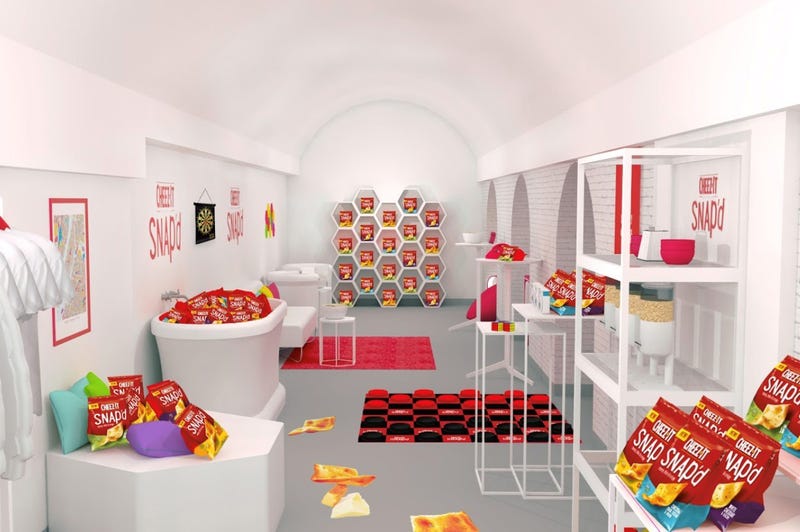 There has been growing concern over the last several years that the world may end, and if it does do you want to be without your cheese flavored snack crackers? You do not! Taking steps to ensure the safety its newest release, Cheez-It has created an bunker, deep underground somewhere in the United States and the cracker maker is going to let you hunt for it.

The bunker, which is full of Cheez-It Snap’d, a super thin and crunchy version of the traditional Cheez-It, was created, according to a press release, because “people have been grabbing multiple bags at stores and Cheez-It is genuinely concerned about a shortage.” While that doesn’t sound like a very real justification for building this bunker, that doesn’t make it any less real. A mock-up released by Cheez-It shows an all-white room that looks like it could have come out of CB2 catalog, except for the hundreds of bags of Cheez-It Snap’d strewn all over.

At the moment the snack maker is being cagey about the location of the crunch-filled safehouse though. “The exact coordinates of the Snap’d bunker are a secret—it might be tucked away in a cheese cave, an old cellar or a retired subway tunnel.” That secret will start to be revealed starting on May 14 when Cheez-It starts tweeting out clues to the bunker’s location.

This isn’t just some kitschy, for-the-fun-of-it scavenger hunt either. Whoever finds the bunker first will be rewarded with a year’s supply of the new snacks along with a huge TV and a year-long subscription to a streaming service. Whether or not you’ll be allowed to hole up in the bunker for that year though remains to be seen.