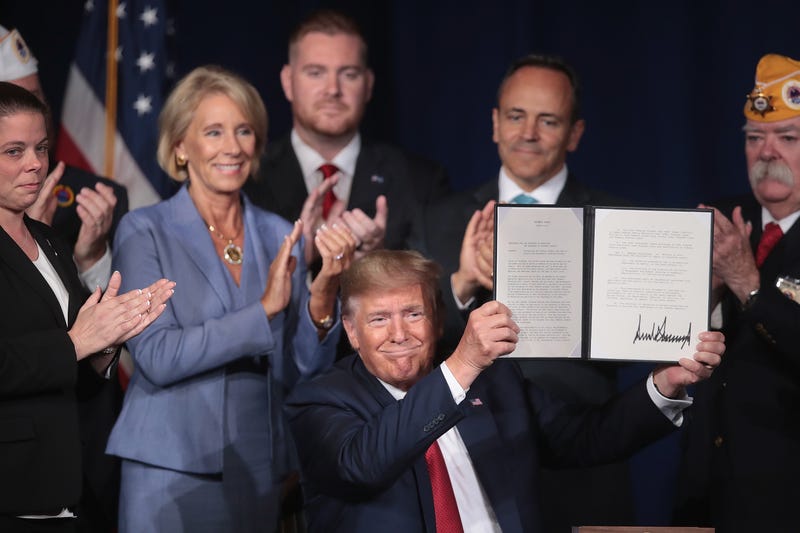 During the AMVETS 75th National Convention in Kentucky, the president announced and then immediately signed a presidential memorandum to eliminate that debt.

"Today I'm proud to announce that I am taking executive action to ensure that our wounded warriors are not saddled with mountains of student debt," Trump said. "In a few moments, I will sign a memorandum directing the Department of Education to eliminate every penny of federal student loan debt owed by American veterans who are completely and permanently disabled."

Veterans who are 100-percent disabled already are eligible to have their student debt erased, but so far many have either not taken advantage of that opportunity, or don't know they're eligible.

The VA and Department of Education last year launched a joint effort to try to educate the public about the benefit, but so far, half of the 50,000 eligible veterans haven't signed up, remaining in debt. Congress has called for similar measures to erase the debt without veterans having to do any paperwork.

Education Secretary Betsy Devos and VA Deputy Secretary Jim Byrne were in the audience for the announcement and participated in the signing. The memorandum directs VA and the Department of Education to create a new way to help veterans get their debt erased since the current process is "burdensome" and "overly complicated and difficult," the memorandum says.

"Nobody can complain about that," Trump said. "The debt of these disabled veterans will be entirely erased -- it'll be gone. You're going to sleep well tonight."

The executive action wipes out an average of about $30,000 in debt for 25,000 eligible "fully and permanently disabled" veterans "who have made sacrifices -- the ultimate sacrifice in many ways for our nation. They've made a sacrifice so great ... and they never complain. That's hundreds of millions in student loan debt held by our severely wounded warriors. It's gone forever."

In a fact sheet issued by the White House Wednesday, the president's action was described as intended to ensure "disabled veterans have their federal student loan debt discharged with minimum burdens" the current process has "inflicted significant hardship and serious harm on these veterans and has frustrated the intent of Congress that their federal student loan debt be discharged."

There will be no federal income tax on the forgiven debt, Trump added.

Moments later, that's exactly what he did.

Trump also called on all 50 states "to immediately waive all applicable state taxes as well ... Most of the states have already agreed to do that."

"Veterans who have made such enormous sacrifices ... should not be asked to pay any more," Trump said. "Rather, it is America who owes our heroes a supreme debt of gratitude."

Last year, the Department of Education announced it planned to make it easier for disabled veterans to have their loans forgiven. Eligible veterans should have received letters in the mail.

For more information, or if you think you might be eligible to have your debt erased, click here.