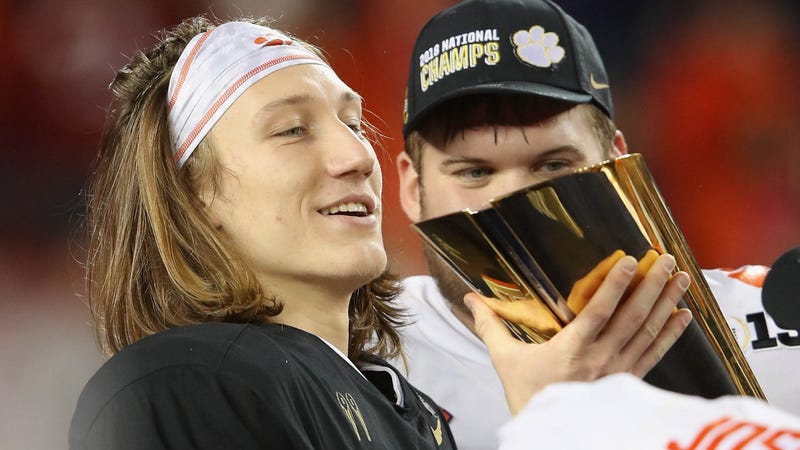 Picture this, in two years: The most decorated college football player in recent memory heads to the NFL Draft to become the No. 1 overall pick.

Clemson rising sophomore quarterback Trevor Lawrence has that chance. Before you roll your eyes, let’s think about who is this generation's standard in college football.

As a freshman in the 2006 season, Tebow played a key role in Florida winning a national championship as a gadget backup QB who usually ran but occasionally threw out of the backfield. A year later, as the starter at quarterback, he became the first sophomore to win the Heisman Trophy. He followed that up with another national title in the 2008 season as a junior, and his four-year college career ended with a Sugar Bowl win. In all, he finished with three top-five Heisman finishes, two national titles, a Manning Award (best quarterback), a Maxwell Award (best all-around player) and shelf full of other awards.

Matt Leinart led USC to two national championships (one of them split) and was a Heisman finalist three times in his career as a Trojan. He deserves a mention on this list.

Herschel Walker was a Heisman winner and three-time finalist in his three seasons at Georgia. The powerful running back was the best player on the Bulldogs' national title team his freshman season in 1980. David Pollack had an NFL career that was shortened because of injury, but the linebacker's college career at Georgia consisted of three consensus All-American seasons and two SEC player of the year awards. Pollack is missing a national title.

Reggie Bush had two ridiculous seasons as USC running back in 2004 and 2005, culminating in winning a Heisman that eventually was stripped. His resume suffers from a freshman year in 2003 during which he gained “only” total 1200 yards. Same for Texas quarterback Vince Young, who was nothing short of incredible for two seasons -- but it was just that: two seasons.

Back to Trevor Lawrence.

This past season as a freshman, he got some playing time in the early weeks before officially winning the starting job in late September. He led Clemson to 11 more victories en route to a 15-0 record and a national title, providing the exclamation point with a brilliant performance in a rout of Alabama in the championship game. He looked every bit the part of a future No. 1 pick as the season went on.

Trevor Lawrence is the best true freshman QB I've ever seen. If I was running an NFL team, I'd be making trades for as many 2021 picks I could get my hands on.

Lawrence enters his sophomore year in 2019 as the early Heisman favorite on a team that figures to be No. 1 or No. 2 in the preseason rankings. With the returning talent around him and the state of the rest of the ACC, there is no reason to think Lawrence won’t be in the College Football Playoff again the next two seasons.

But Lawrence is on track to be the No. 1 pick in the NFL Draft in 2021 -- or 2022, if he stays in school and exhausts his eligibility. Tebow was never even in that conversation.

Football is a weird game, and injuries have a way of derailing the best plans and best players (see: Sam Bradford). But with the ability Lawrence has shown and the wealth of talent around him at Clemson, he can -- and will -- be mentioned right next to Tebow as the most decorated player we’ve seen in college football.