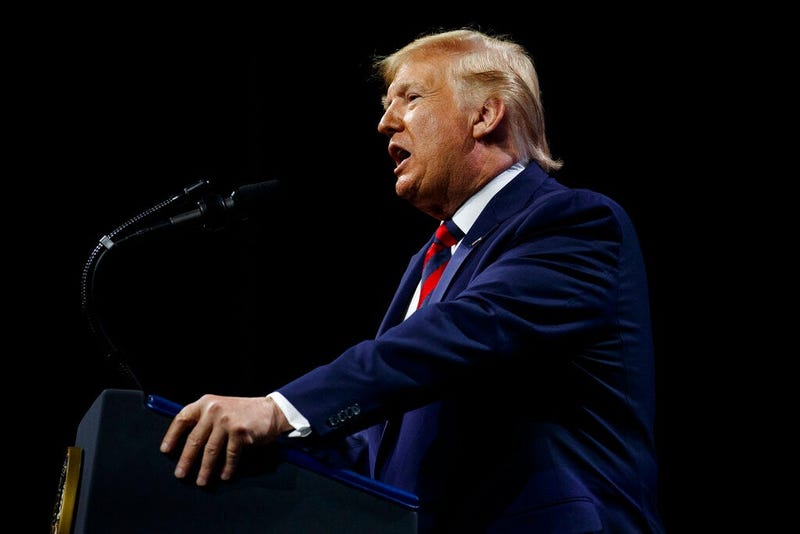 (WBBM/AP) -- President Donald Trump slammed Chicago Police Superintendent Eddie Johnson and the city's violence during his address Monday at the International Association of Chiefs of Police Annual Conference and Exposition, held at McCormick Place in Chicago.

Johnson, the host of a gathering of police chiefs from around the country that Trump addressed, previously said he will not attend the speech because he opposes the administration's immigration policies.

"He feels that the values of the people of Chicago are more important than what the President has to say," said Chicago Police Spokesman Anthony Guglielmi. "What he means by that is, we've been very clear on our position regarding how we treat individuals that live in the city. We don't care where you're from. We don't care how you got to Chicago. We safeguard everybody that lives here."

In response, Johnson made a statement, through police news affairs, saying: "I understand and respect that the Lodge is upset about the decision to not stand with the President. I can't in good conscience stand by while racial insults and hatred are cast from the oval office, or Chicago is held hostage because of our views on new Americans."

President Donald Trump disagreed with Johnson's choice and called his statement insulting after everything he has done for police.

"There is one person who is not here today. I said where is he, I want to talk to him. In fact, more than anyone else, this person should be here, because maybe he could learn something. And that's the Superintendent of Chicago Police, Eddie Johnson," Trump said Monday. "A few days ago, Johnson said quote, 'the values of the people of Chicago are more important than anything President Trump would have to say.' I don't think so, because that's a very insulting statement after all I've done for the police and I've done more than any other president has ever done for the police. Over 100 years we can prove it, but probably from the beginning; and he's a man who could not bother to show up for a meeting of police chiefs - most respected people of the country in his hometown and with the President of the United States.

"And you know why? It's because he's not doing his job," Trump continued. "Last year, 565 people were murdered in Chicago. Since Eddie Johnson has been police chief, more than 1,500 people have been murdered in Chicago and 13,067 people have been shot. During the first weekend in August 2019, seven people were murdered and 52 were wounded in 32 shootings in Chicago, and recently, they had 78 shootings over a weekend spree and three people killed. And Chicago has the toughest gun laws in the United States. That does not seem to be working too well does it? A lot of you people seem to know exactly what I mean, but under Johnson's leadership, they certainly don't protect people.

"Then you have the case of this wise guy Jussie Smollett, who beat up himself. And he said MAGA country did it, MAGA country. That's a hate crime, that's a hate crime. And it's a scam. It's a really big scam, just like the impeachment of your president is a scam. And then you look what's going on - Smollett is still trying to get away with it. He would have been better off if he paid his $100,000 bill," Trump continued.

"Chicago is unfortunately the worst sanctuary city in America. Chicago protects criminals at a level few could even imagine. Last year in Cook County alone, ICE asked local law enforcement people to please, pretty please, we beg you, we'll do anything necessary to stop crime. We want to stop crime. Please detain 1,162 people, please, but in each case the detainer was denied and Eddie Johnson wants to talk about values. People like Johnson put criminals and illegal aliens before the citizens of Chicago and those are his values, and frankly, those values to me are a disgrace. I will never put the needs of illegal criminals before I put the needs of law-abiding citizens. It is very simple to me," Trump said as the crowd cheered.

"So when Eddie Johnson and lots of other people from many regions and areas support sanctuary cities, it's really in my opinion a betrayal of their oath to the shield and a violation to his duty to serve and to protect. The courageous police officers of Chicago, and I know some of them and they are some of the most incredible people, they can solve this problem quickly.

"It's embarrassing to us as a nation that all over the world they are talking about Chicago. Afghanistan is a safe place in comparison. It's true," Trump said. "Police officers of Chicago are entitled to a police superintendent who has their backs and knows what he is doing. You are entitled to a police superintendent who sides with you, with the people of Chicago. The people want this. And with the families of Chicago - not the criminals and the gang members that are here illegally and not the stupid politicians that have no idea what the hell they are doing."