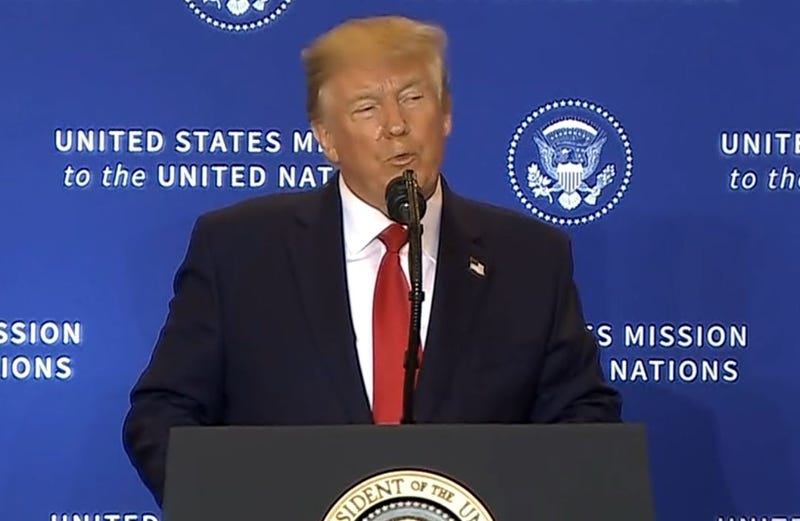 The president criticized the media and in particular The Washington Post. He lauded his healthy relationship with several countries around the globe, positive U.S. unemployment rates, and refuted reports by the "so-called" whistleblower and the "phony witch hunt."

When asked about the phone call he had with the Ukraine president, Trump said, "We've got an honest group of people who've been maligned."

"It was a very innocent call... but I don't like the precedent of releasing calls... I hated it, but you folks were saying such lies, innocent things about the call which was so nice," Trump said answering a question about why he released the transcripts of the call.

Trump was under pressure to release telephone records of a conversation he had with Ukraine's new president Volodymyr Zelensky in which the president appears to prod Zelensky to investigate Joe Biden and his son Hunter Biden's business interests in Ukraine. Additionally, Trump urged Zelensky to work with Attorney General William Barr and Rudy Giuliani.

"I would like for you to do us a favor," Trump said in the conversation.

In the days leading up to the call, Trump ordered a hold on military assistance to Ukraine, which was approved by Congress. Democrats are demanding to know whether or not the money was withheld in order to pressure Zelensky.

Democrats claim that the call equals a "shakedown" of a foreign leader, while Trump, backed by the majority of the GOP, dismissed the conversation as a "nothing call."

It's illegal to seek foreign government assistance for U.S. elections.

CLICK HERE TO SEE A COPY OF THE TELEPHONE TRANSCRIPTS.

Trump complained about the treatment of his family and touted the U.S. economy. "When you see little Adam Schiff stand at the mic, but then Nadler must go in the back of the room and laugh their a**es off," Trump said.