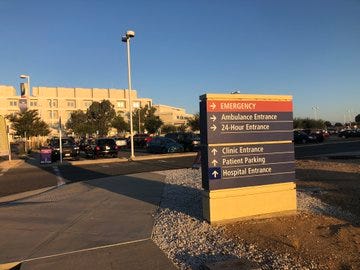 (KNX 1070) - A gun battle between numerous police officers and a man after a traffic stop resulted in the death of a CHP officer in Riverside Monday night.

The officer-involved shooting, that also left two other CHP officers wounded, occurred in Riverside in the area of Box Springs Boulevard and Eastridge Avenue.

Riverside police on Tuesday were investigating the motive behind the shooting death of one of its officers.

The CHP officer, who died as a result of the gunfire, has been identified as Andrew Moye Jr.

He was a three-year veteran assigned to the Riverside area after graduating from the CHP Academy two years ago.

Moye is survived by his wife, Sara, his father, mother and stepfather. Another family member, Debbie Howard says she frantically tried to find out what had happened to him after hearing about the shoot-out.

Police in Riverside says the two CHP officers wounded in a gun battle Monday night have traumatic injuries, but the injuries are not believed to be life-threatening.

“Jennifer and I extend our heartfelt condolences to the family, friends and fellow officers grieving the tragic loss of Officer Moye, who will be remembered for his commitment to serving the Riverside County community and the people of California.”

Flags on California buildings are flying at half-staff today in honor of the officer.

The suspected gunman's father, Dennis Luther, was trying to make sense of what happened Tuesday morning, saying his son, 49-year-old Aaron Luther,  was not involved in any effort to target police officers.

Aaron had served time in prison for attempted murder.

Dennis Luther said, by phone to KNX reporter Jon Baird, that he was up all night crying and trying to sort through the fact his son is dead and a suspect in the murder of a CHP officer.

During a late Monday night press conference, Assistant Chief Scott Parker of the CHP Inland Division recounted details of the gunfire exchange that happened around 5:37 pm.

The CHP officer had stopped a white GMC SUV during a traffic stop.

"The CHP officer, at some point during the traffic stop, determined he was going to impound the subject's vehicle and called for a tow truck and was filling out the necessary paperwork to complete that impound. During that process, the suspect entered his vehicle and pulled out a rifle, an unknown caliber rifle, and he engaged our officer with multiple gunshots. Our officer was struck," Parker said in a late-night Monday press conference.

He said the officer was able to broadcast an officer needs assistance call and multiple agencies including several CHP officers and other agencies responded to the call for assistance.

No words to get in the way pic.twitter.com/0QgaMiPn51

"The first three officers that were on scene were CHP officers and the first two officers were immediately engaged with gunfire by this suspect," Parker said.

"During this exchange of gunfire, both of those officers were struck by the suspect's firing at them. One of those officers received major injuries and is in critical condition," Parker said, "The other officer received minor injuries as a result of the gunfire. A fourth CHP officer arrived on the scene and immediately engaged with gunfire and the suspect did return fire...'

He said other agencies responding did engage in gunfire and the suspect was struck and did succumb to his injuries on the scene, according to Parker.

Parker said "currently we had four CHP officers that were on scene. However, two of our officers received injuries ranging from minor to major injuries, and one officer succumbed to his injuries. Three officers total were involved or injured or received fatal injuries."

The first officer that was on scene that made the initial traffic stop was transported to Riverside University Health Center where he died, Parker said.

Officials said they had recovered a rifle.

Police in #Riverside say the 2 #CHP officers wounded in a gun battle last night have traumatic injuries, but the injuries are not believed to be life-threatening. Another officer was killed, along with the suspect. @KNX1070 pic.twitter.com/Y4EwZlMj76

An Officer involved shooting occurred earlier today. Three of our officers were involved and a suspect. One of our officers succumbed to the injuries sustained. Updates will follow!! #californiahighwaypatrol #whatsgoingoninriversidecounty #code3news #bluelifematters💙 #abc7 #ktla pic.twitter.com/yzkHSguQ1P