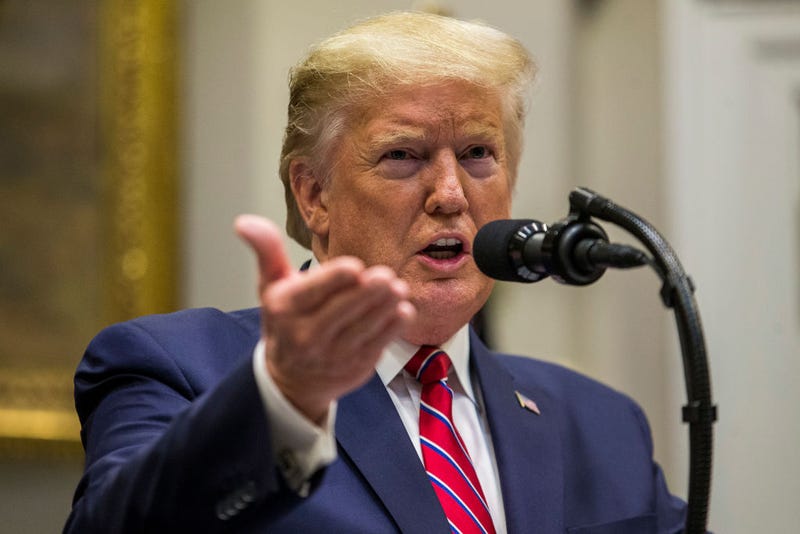 Tuesday marks the the third day there will be public testimony in the impeachment inquiry in President Donald Trump.

The four witnesses scheduled to field questions from the House Intelligence Committee are Jennifer Williams, an aide to Vice President Mike Pence, Lt. Col. William Vindman, a director in the National Security Council, Ambassador Kurt Volker, who was posted in Ukraine, and Tim Morrison, a former national security adviser to Trump.

Check back to this article for commentary and updates about the hearing from journalists in KCBS Radio's newsroom.

All LIVE UPDATES are in Eastern Time.

The #ImpeachmentHearing is back in session. This is going to be a 12-hour day. Testimony probably won't end until almost 9pm eastern.

"I tried to pull up that MemCon because we were planning a BiLat with POTUS and Zelensky."

HPSCI counsel: "Had you ever asked the NSC legal adviser to restrict access before?"
Morrison: "No." https://t.co/J4jAYidyMK pic.twitter.com/whmfx5YHmf

Volker says Ukrainian President Volodymyr Zelensky wanted a White House meeting because he felt "he was not understood by President Trump" and that Trump "didn't appreciate" his movement against corruption in Ukraine https://t.co/xHzl0V73EQ pic.twitter.com/0OLcdOb7uU

Wow, #KurtVolker has done a complete about-face from what he said in his deposition. He now undermines the White House line on Bidens/#Ukraine/2016 interference, he praises Biden, and admits Trump *was* pressuring #Ukraine and demanding investigations, tho he didn't know it b4.

#KurtVolker is testifying that allegations against the Bidens in #Ukraine were "not credible;" he told Giuliani alleged Ukraininan interference in 2016 election was "a conspiracy theory;" & he should've realized Trump was withholding aid to pressure Ukraine to investigate. https://t.co/Fdz4eV2RkF

AFTERNOON WITNESSES: WHO ARE THEY? 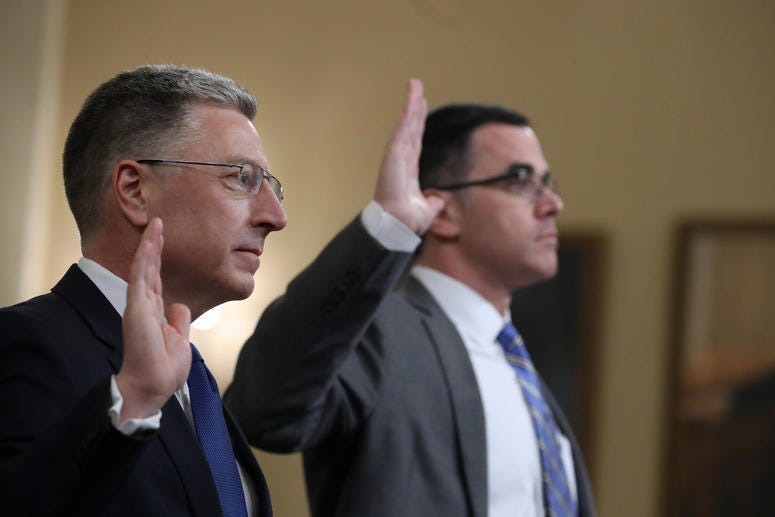 There are two witnesses testifying this afternoon.

One is Kurt Volker. He's the former US special envoy to Ukraine and one of the so-called "three amigos" who were given special authority over American relations with the Eastern European country. European Union Ambassador Gordon Sondland and Energy Secretary Rick Perry make up the rest of the trio. Volker has denied participating in efforts to unearth damaging information on former Vice President Joe Biden, but he's provided text messages to Congress that show he talked to officials in Ukraine that President Trump had wanted, according to CNN.

The other witness is Tim Morrision who was a Russia expert with the White House's National Security Council. Morrision is important because he listened to Trump's July phone call with Ukraine's president and had important exchanges with Sondland about military aid for Ukraine, the Washington Post said.

WHAT ARE WE TALKING ABOUT HERE?

Many people seem confused about what "high crimes & misdemeanors" means. It's an archaic term of art from English law. A high crime is an offense by someone in a high position of power. Essentially it means abusing power or betraying public trust. Not necessarily breaking the law

We are awaiting resumption of testimony at today's #ImpeachmentHearings. We expect this afternoon's witnesses, #KurtVolker and #TimMorrison to enter the room around noon PT. Expect a flip of the script this time: Democrats on attack, Repubs using testimony to help make their case

Vindman describes his first thoughts after he heard Trump ask Ukraine to investigate the Bidens: "Frankly, I couldn't believe what I was hearing. It was probably an element of shock."

Why did he report it immediately?

Wow: gallery breaks into applause after #AlexanderVindman testifies that he took "ultimate risk" of exposing wrongdoing by POTUS because "This is America. This is the country that i've served and defended...and here, right matters." #ImpeachmentHearings

Two points here:
1) These tweets attacking current White House official #AlexanderVindman are coming from the official @WhiteHouse Twitter account, which is a taxpayer-funded government function, not a campaign account.
2) #TimMorrison will testify this afternoon, at GOP request https://t.co/MX2SN54zFJ

Jim Jordan gets another shot, and casts the entire #ImpeachmentInquiry as a desperate Democratic attempt to thwart the will of the people and undo the election of 2016:"They've been out to get the president" since the day he took office.

Fireworks between #JimJordan and #AlexanderVindman, as Jordan questions why Vindman discussed the call with others after being told not to.
"Mr. Jordan, I did my job."
Vindman corrects Jordan on the timeline of events #ImpeachmentHearing

Now, it's @EliseStefanik's turn, the NY GOP Rep who's become a sudden Republican star because of the #ImpeachmentHearings, but whose 2020 opponent has also had a field day raising money off Stefanik's performance here.

Trump just spoke, dismissing #ImpeachmentHearing as a "disgrace" and "kangaroo court," and said GOP lawmakers are "killing it." Trump said, "I don't know Vindman," "I never heard of him."

.@RepRatcliffe displays stack of depositions to make the point that suddenly, the Democrats claim @realDonaldTrump committed "bribery," but there was no mention of that word by any witness in depositiions - except in relation to Biden/Burisma. #ImpeachmentHearing

Much of the GOP line of questioning bolsters the case @realDonaldTrump makes to his base: #ImpeachmentHearing is a hoax, the witnesses are leaking, biased Deep State #NeverTrumpers, the Bidens are corrupt. None of that is supported by evidence or testimony.

Jordan, as Nunes did, also suggests that #AlexanderVindman leaked information to the media. Jordan asks him directly if he leaked. Vindman says "I never did and never would" and that it's "preposterous" to suggest or imply that he did. #ImpeachmentHearing

The committee has taken a five to 10 minute break. When it resumes, representatives on the committee will each get five minutes to question the witnesses.

Here's the tense exchange in which @DevinNunes attempts to get #AlexanderVindman to name the #Whistleblower. There were groans from Republicans when @RepAdamSchiff said "We have to protect the whistleblower." #ImpeachmentHearing https://t.co/eHjuGoWzAU

Nunes tells #Vindman he has to answer or take the 5th, when Vindman says he's not supposed to discuss members of the intelligence community. Vindman's lawyer interrupts and says they're following committee rules. A disgusted Nunes finally gives up.

Nunes and #AlexanderVindman are sparring now over questions about the intelligence community and the #Whistleblower. Nunes wants Vindman to answer, but he won't. Schiff interrupts: "This hearing will not be used to out the whistleblower." Nunes refers to hearing as "inquisition"

What does the public think of the impeachment proceedings? FiveThirtyEight is analyzing data from opinion polls about it.

Schiff: "Col. Vindman, what was your real time reaction to hearing that [July 25] call?"
Vindman: "Chairman, without hesitation I knew I had to report this to the WH counsel. I had concerns, and it was my duty to report my concerns to the proper people in the chain of command." pic.twitter.com/4U0fKzm9tM

#Vindman makes a leetle joke: "I speak Russian, Ukrainian and a little bit of English." Always good to have some human levity in these otherwise somber proceedings #ImpeachmentHearings

My colleague @SovernNation is the father (and brother) of twins. I have a pair of twin brothers. We both smiled when Lt. Col. Vindman referred to his "little brother" (identical twins). Typical twin behavior!

Remember, both of today's witnesses still work in the Trump @WhiteHouse. They are non-political, career foreign service staffers, and both say they sounded the alarm about Trump's #Ukraine call. They seem nervous and not very comfortable in this very public setting.

The only GOP rebuttal to #AlexanderVindman is going to be that what @realDonaldTrump did on the call does not rise to the level of an impeachable offense. #ImpeachmentHearing

​Lt. Col Alexander Vindman wears a lot of medals and ribbons on his Army officer's uniform. Some of them: the Combat Infantryman Badge, the Expert Infantryman Badge, and the Parachutist Badge. He also owns the Ranger Tab, signifying completion of Army Ranger School. He's also a Purple Heart recipient.

Williams says she found President Trump's call with Ukraine's president "unusual" because it "involved discussion of what appeared to be a domestic political matter" https://t.co/OZ2lHu07Z6 pic.twitter.com/h4wBl0odqI 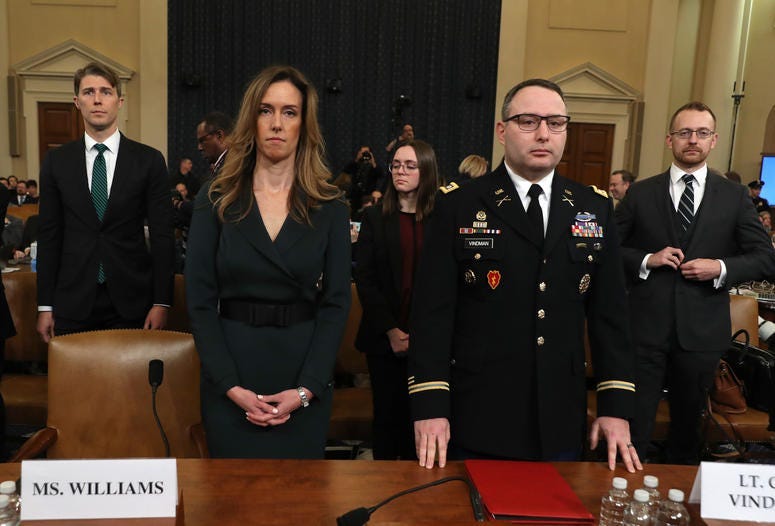 Who are these witnesses?

Jennifer Williams is a longtime Foreign Service officer who was assigned earlier this year to the staff of Vice President Mike Pence.  In that capacity, she listened in to the controversial July 25 phone call between President Trump and Ukrainian President Zelensky.

Lt. Col Alexander Vindman is a decorated career military officer assigned to the staff of the National Security Council.  He was wounded by a roadside bomb while on duty in Iraq. He also raised concerns about the July 25 Trump-Zelensky call.

After Schiff's 10-minute opening statement, @DevinNunes is giving one of his own, that so far is a blistering attack on the news media. Ask the @FresnoBee: the Central Valley Congressman is no friend of the Fourth Estate.

Curiously, the "live" TV feed of this morning's #ImpeachmentHearings is more than 2 minutes behind our live radio feed. By the time you see it happen on TV, history has already been made on the radio.

Rep. Adam Schiff , Democratic chairman of the House Intelligence Committee, has officially opened the session and is beginning with a statement. 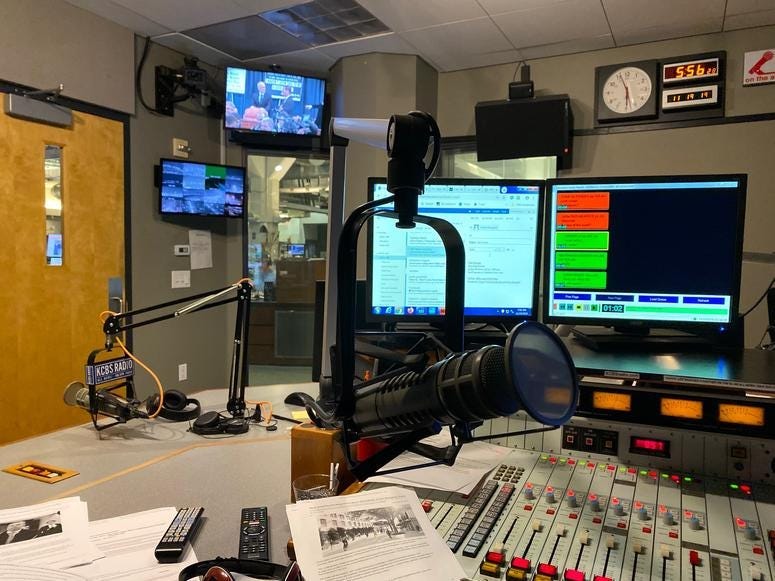 And we're all set. View from Studio A . Doug Sovern will set up in his listening post to monitor today's testimony. We start in a few minutes with  witnesses Jennifer Williams, an aide to Vice President Mike Pence and Alexander Vindman, the top Ukraine expert for the National Security Council appearing before the House Intelligence Conmmitee.