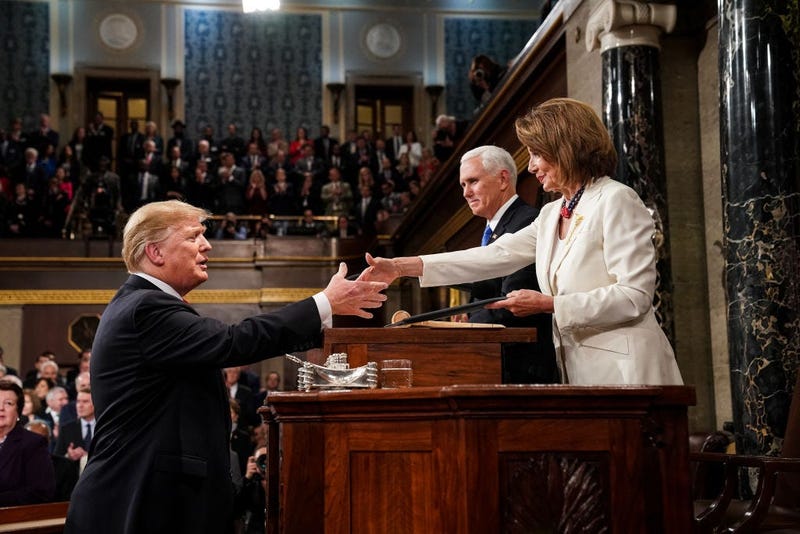 The House votes to approve proposal to limit Trump's ability to take military action against Iran.

The House is expected to vote on a proposal to limit President Donald Trump's ability to take military action against Iran. The vote is expected to happen at 5:00 p.m. (ET).

As tensions rise in the Middle East amid a confrontation between the U.S. and Iran, pressure is rising at home between the White House and Capitol Hill.

Congress and the president are set to square off over presidential war powers this week.

On Sunday, House Speaker Nancy Pelosi announced a plan to hold House votes to limit President Donald Trump’s ability to involve the U.S. in military conflict with Iran after the killing of Gen. Qassem Soleimani. A Senate vote is expected to follow.

This isn’t the first time that lawmakers have attempted to curb the president’s war powers.

In the early draft of the House annual defense spending bill, members included a repeal of the Authorized Use of Military Force (AUMF) against Iran without Congressional authorization.

The draft also included a repeal of the AUMF against Iraq, originally authorized in 2002.

But neither of those measures made it into the final compromise legislation that passed both chambers and was signed into law by the president.

Pelosi did not rule out further votes.

"The House may also soon consider additional legislation on the floor to keep America safe," including a bill from Rep. Barbara Lee, D-Calif., to repeal the 2002 Iraq AUMF and another from Rep. Ro Khanna, D-Calif., that would prohibit funding for military action against Iran that are not authorized by Congress.

“The administration must work with the Congress to advance an immediate, effective de-escalatory strategy that prevents further violence.  America and the world cannot afford war," Pelosi said.

The airstrike that killed Soleimani and others was “provocative, escalatory and disproportionate” and “continues to put service members, diplomats and citizens of America and our allies in danger," Pelosi said earlier this week.

“This initiation of hostilities was taken without an Authorization for Use of Military Force (AUMF) against Iran, without the consultation of the Congress and without the articulation of a clear and legitimate strategy to either the Congress or the public,” Pelosi said.

The resolution Pelosi said will be introduced and brought to a vote this week is expected to contain a directive to end all military hostilities with Iran in 30 days unless Congress explicitly provides additional authorization, such as a declaration of war.

In a letter to Democrats, Pelosi wrote that a war powers resolution vote would “reassert Congress’ long-established oversight responsibilities.

"As Members of Congress, our first responsibility is to keep the American people safe. For this reason, we are concerned that the Administration took this action without the consultation of Congress and without respect for Congress's war powers granted to it by the Constitution.”

While the president is not legally obligated to consult with Congress over emergency military action, only Congress has the constitutional authority to declare war.

Rep. Elissa Slotkin, D-Mich., is expected to lead the resolution, Pelosi said. Slotkin is a former Pentagon and CIA analyst. Slotkin said in a series of tweets on Jan. 3 that previous administrations she served under decided to avoid potential risks associated with targetting Soleimani.

“The Trump administration has made a different calculation,” she wrote.

The president tweeted on Sunday that his social-media posts “will serve as notification to the United States Congress” of his military plans and that “Such legal notice is not required, but is given nevertheless!”

The House Foreign Affairs Committee fired back, advising Trump to “read the War Powers Act” and that “war powers reside in the Congress under the United States Constitution.”

On Wednesday, Pelosi said that Congress' concerns about the administration's decision to engage in hostilities with Iran and about "its lack of strategy moving forward" were "not addressed by the president's insufficient War Powers Act notification and by the administration's briefing today."

The War Powers Act, which became law in 1973, aims to limit the president’s ability to enter the United States into military conflict without Congressional approval.

'Honest mistake' sets off alarm about US troops in Iraq

How do the draft, recall to duty and stop-loss work?