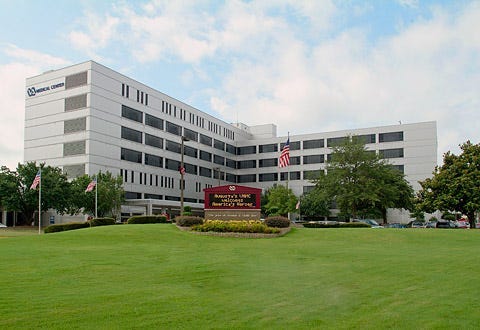 A homeless veteran who had a long history of mental illness and other conditions was restrained for days, given "unnecessary" sedatives and subject to other failings by staff before their death at a Georgia Veterans Affairs hospital, a new watchdog report shows.

The Department of Veterans Affairs Office of the Inspector General (OIG) found that those actions by VA staff "likely contributed to the patient's death."

The veteran, who was in their 60s, was kept in restraints for 71 hours.

The patient, who had been admitted for mental health treatment 36 times since the 1990s, had also been on long-acting medications to manage their mental illness for more than 15 years. The veteran also had been flagged for past disruptive behaviors, including threats and aggressive behavior toward staff.

In spring 2019, the patient arrived at the VA hospital's walk-in mental health clinic asking for one of his medications, though he was not due to receive it for another 24 days. A day later, he showed up at the VA's program for homeless veterans "yelling, cursing and not appropriately dressed."

The veteran was taken to the emergency department for an involuntary mental health evaluation, where staff found he had low blood sodium and needed medical treatment. Lab tests did not find evidence of alcohol or illegal drug use. Two hours after he arrived at the ER, the veteran became verbally aggressive and threatened to kill a staff member. The veteran was restrained and given three sedatives.

The veteran was next transferred to the intensive care unit for monitoring and treatment, where they went into respiratory distress and were placed on a ventilator and received more sedatives.

Hours later, the veteran was returned to the Augusta VA ER, still in restraints, which were later removed. A nurse gave more medication injections and documented that the veteran was breathing, but did not register a blood pressure. The patient had a pulse, but was not breathing, a doctor found. The medical team tried to resuscitate the veteran, but they died.

Investigators said they couldn't link overmedication to the veteran's death, but said the other failings by hospital staff likely contributed and the medical examiner found a "history of prolonged restraint" during an examination of the body.

Medical staff "improperly" used restraints on the veteran, according to the report, and kept them in the restraints "excessively without a physician's order." Nurses also had no received consistent training on restraint use and monitoring according to VA policy, the report said.

Staff further failed to properly document when and how medications were administered to the veteran.

When the patient said he needed to smoke, medical staff didn't assess his nicotine dependence, which could have unnecessarily exacerbated his agitation and distress and led to subsequent medication, sedation, intubation and restraint.

Staff also did not accurately determine whether the veteran was able to make decisions on his own, or whether VA needed to involve the patient's family.

OIG found that a lack of a mental health provider involved in the veteran's final days "likely contributed to the patient's death."

The four-hour ambulance ride, still in restraints, from the VA to the non-VA mental health facility that ultimately would not accept a restrained patient, also likely led to the blood clots that caused the patient's death.

VA staff, according to OIG, deflected blame on others for the failings that may have contributed to the veteran's death.

The chiefs of mental health and social work at the Augusta VA hospital told investigators earlier this year that mental health coverage had been expanded at the hospital's ER and downtown division and they were working on further expansions, though an accreditor cast doubt on those claims.

The hospital director did not initiate an investigation into the root cause of the veteran's death until the OIG team arrived for its review, according to the report.

The Augusta VA disciplined three nursing leaders; a clinical social worker is assigned for all patient treatment areas; new policies are being created; ER and other medical staff are being retrained on vital signs and patient monitoring; staff are receiving more training on restraint use; and more.

"The Charlie Norwood VA Medical Center grieves for the loss of this veteran and extends our deepest condolences to their loved ones," Jackson told Connecting Vets in a provided statement. "While this isolated incident does not represent the quality health care tens of thousands of Augusta-area veterans have come to expect from our facilities, it has prompted a number of improvements that will strengthen our continuity of care and prevent similar issues from happening in the future ... I have been working pto personally ensure this incident brings lasting change and real improvement. Augusta-area veterans deserve no less."

Deficiencies in Care, Excessive Use of Restraints for Patient Who Died at the VA Medical Center in Augusta, Georgia.

VA doctor said they did 'not care' if veteran killed himself. 6 days later he did.