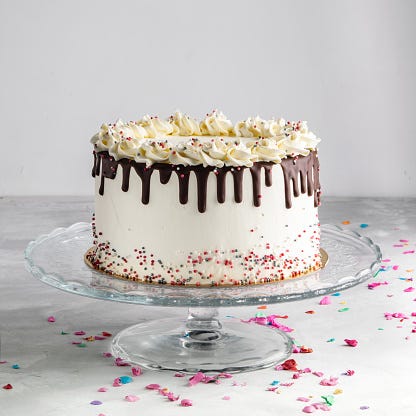 Sometimes you can’t have your cake and eat it too!

At least that’s what a Texas woman found it when she ordered a cake for her daughter’s graduation at Walmart.

Last month, Marsy Flores placed an order for a customized two-tier cake from the bakery of the chain’s Pasadena, Texas location.

When Flores went to pick up the cake on the morning of her daughter’s graduation, she was informed that store had no history of her order.

Walmart on Shaver/Southmore sucks. My sister ordered a 2 tier cake and they lost the order. Then they tell her they will...

With the party just hours away, a store employee offered to give Flores a smaller ready-made white and blue cake for free, which could be customized with a photo of the graduate.

Crisis averted...or so she thought.

Flores took the cake home and soon discovered that all was not what it seemed.

Upon trying to cut the cake, Flores found that underneath the frosting the cake was actually Styrofoam. The old fake cake trick!

Needless to say, the entire family was in shock over having the day ruined.

Flores’ sister shared a video of the “humiliating” fake cake incident to Facebook and the story went viral.

Once Walmart got wind of the mishap, they attempted to rectify the situation by giving Flores a $60 gift card and another non-fake cake as an apology.

But it appears the gesture was a small consolation for all their trouble.

“They can't replace the moment that we lost. It’s a special moment, and this is what we got for it, a Styrofoam cake,” Flores told KPRC. “Not only did they mess up one time, they did it twice.”

Walmart is reportedly looking into the situation further to make sure it doesn’t happen again.

"We apologize for our mistake,” a Walmart spokesperson told Today.“This is never something we want to take place.”