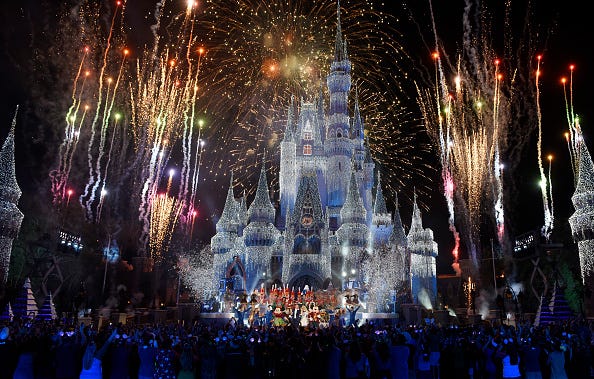 Both parks shuttered the weekend of March 14.

California is currently under a stay-at-home order, which means all non-essential businesses must stay closed until the order is lifted. It is unknown when the order will be lifted.

"While there is still much uncertainty with respect to the impacts of COVID-19, the safety and well-being of our guests and employees remains The Walt Disney Company’s top priority, " reads a statement from the company. "As a result of this unprecedented pandemic and in line with direction provided by health experts and government officials, Disneyland Resort and Walt Disney World Resort will remain closed until further notice."

As for the future of its staff, the statement read, "The Walt Disney Company has been paying its cast members since the closure of the parks, and in light of this ongoing and increasingly complex crisis, we have made the decision to extend paying hourly parks and resorts cast members through April 18."

music
Machine Gun Kelly and Megan Fox kiss and take a victory lap in 'drunk face' video
music
The coaches of 'The Voice' get together and remind us it’ll be alright with this Bob Marley classic
music
Florida Georgia Line's Tyler Hubbard shows off massive new tattoo
sports
'Confused' Timberwolves eyeing LaMelo Ball, but could still trade out of No. 1 pick: report
music
Naya Rivera's ex reveals their 5-year-old son asked to go to heaven to see his mom
sports
Turf war: NFLPA calls for synthetic fields to be converted to grass