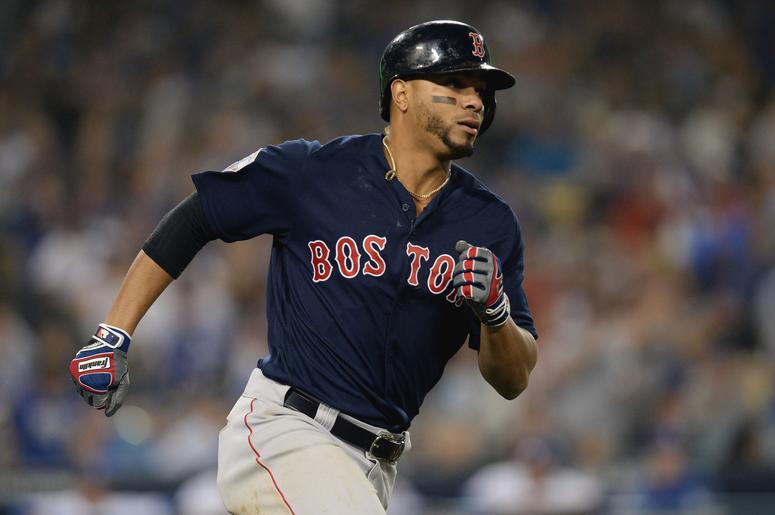 BOSTON (WEEI.com) -- On the surface, the Nathan Eovaldi signing suggested the Boston Red Sox were simply putting smiles back on the faces of all those players who won a World Series by keeping things intact. Steve Pearce is back, and now is one of the postseason's other heroes.

But make no mistake about it, the Eovaldi commitment was the first step made by the Sox to address what is going to be a really, really game-changing offseason a year from now.

Let’s gooooooooo!! Don’t know why he opened his mouth like that but whatever...you’re still my guy!! 👏🏽 👏🏽 👏🏽 @redsox well done!!#welcomebacknasty #stillascrubonfortnitefool

Eovaldi represents the chance to slot someone in the top of the rotation, a skil set that is still one of teams' most coveted items. See what the New York Yankees did to get James Paxton, or how much Patrick Corbin got from the Washington Nationals.

And why this is so important to the Red Sox is because of what they might very well be left with following the 2019 season. Their ace, Chris Sale, is slated to become a free agent and with an uncertain shoulder, the idea of allocating a crazy amount of years and money to the lefty is far from a no-brainer. Rick Porcello is also up, potentially leaving this team with another rotation hole.

Without Sale and Porcello, the Red Sox would be left with leaning on David Price and Eduardo Rodriguez at the top of their rotation, hence taking the calculated risk on Eovaldi.

There isn't any immediate starting pitching help from the minors on the horizon and the idea of relying on a 2019-20 free-agent class that is made up of Justin Verlander, Rich Hill, Madison Bumgarner, Hyun-Jin Ryu, Gerrit Cole and Michael Wacha promises to be pricey and fairly risky.

So, you have Eovaldi as your starting pitching fail-safe.

It's not so simple when it comes to Xander Bogaerts and J.D. Martinez, who are also in line to hit free agency after next season.

While Bogaerts hasn't had the production fellow 2019-20 free agent Nolan Arenado had, the payday might not be that different considering how relatively young (27 years old) the shortstop will be when hitting the market. And with Mookie Betts' contract on the horizon after the 2020 season, it becomes evident there can only be so many of those $250 million-plus contracts.

The Red Sox could explore trading Bogaerts this offseason, but the guess is they value him too much with this win-now team. There is certainly no logical replacement at shortstop (as an everyday player) either in the minors or on the major league roster.

The problem is that there are also no obvious solutions if Bogaerts leaves. Not only are we talking about the position, but his middle-of-the-order presence is something that would also have to be replaced. This is, after all, basically the world champs' No. 4 or No. 5 hitter. When the Yankees replaced Derek Jeter by targeting Didi Gregorious, there wasn't the expectation he would become the offensive threat the shortstop became. (Gregorious, by the way, will be the other high-priced shortstop on the free agent market after this coming season.)

The challenge for the Red Sox will be to execute what Brian Cashman was able to for the Yankees, giving up someone like Shane Greene to get one of the best shortstops in the American League. It can happen.

The biggest challenge, undoubtedly, will be the situation with J.D. Martinez.

If there is no extension worked out this offseason, the strong likelihood is that Martinez will opt-out of his contract after 2019, with his pay actually due to go down as the five-year contract unfolds. Dave Dombrowski said he is in no rush to restructure the slugger's deal, citing the medical protection (putting Martinez's preexisting Lisfranc foot ligament issue in the crosshairs) as a reason to wait things out. And the designated hitter/outfielder has said he has no interest in talking contract once the season begins.

But this is the riskiest of moves for the Red Sox.

If they let Martinez get to free agency, he is most likely going to find a better deal than what the final three years will pay him under the current contract. And replacing all that the righty hitter represents is going to be near impossible. There is Martinez's impact on the lineup (as David Ortiz recently reminded us). There is the obvious production. And there is the influence he has had on some of the most important pieces of this batting order.

Is Paul Goldschmidt a better fit? It wouldn't seem so. And neither are some of the other free agents-to-be, such as Jose Abreu, Khris Davis or Justin Smoak. Good, but not Martinez.

So the Red Sox should enjoy the fairly easy-breezy offseason this time around. Storm clouds are coming.