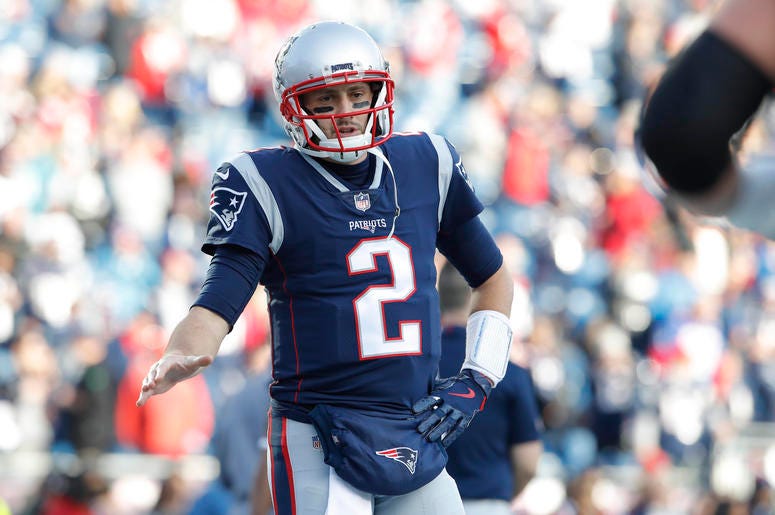 BOSTON (WEEI.com) -- Backup quarterbacks often get overlooked, especially when the starter plays the entire season at a high level, but not with the 2018 New England Patriots.

Tom Brady's veteran backup, Brian Hoyer, played as big of a role in the success of the team as any backup quarterback possibly could.

Devin and Jason McCourty, the standout Patriots defensive backs, highlighted Hoyer's work when sitting down with Albert Breer of MMQB to break down Super Bowl LIII.

“Hoyer’s been crucial,” Jason said. “Hoyer’s not a scout-team quarterback from the standpoint where, ‘OK, here’s the card, here’s what’s circled, and I’m gonna throw the ball here.’ Hoyer lines up, and says, ‘Here’s the card, but this is just a route concept.’”

Hoyer did a lot of prep leading into Super Bowl week, including watching Peyton Manning’s "Detail" series on ESPN+ on Jared Goff, as well as Amazon’s "All or Nothing" series on the Rams in 2016. He recognized the language and used it to his advantage to help the Patriots defense.

The veteran backup had some inside knowledge of the Rams offense from having played in a Kyle Shanahan offense with the Cleveland Browns in 2014 and the San Francisco 49ers in 2017. Rams head coach Sean McVay was the tight ends coach with Mike and Kyle Shanahan in Washington from 2010-13, and adopted later elements of that offense with the Rams.

The Patriots defense held the Rams offense to a Super Bowl-low three points.

“Having played in that offense, they don’t have an answer for all-out pressure,” Hoyer said to Breer. “Their answer is for the quarterback to make a play.”

One of the biggest plays of the game came on an all-out pressure late in the fourth quarter when Stephon Gilmore picked off Goff inside the 5-yard line to seal the victory. The pressure forced Goff to make a play, which he couldn't do.

“We didn’t blitz them a lot, just because of their offense, so many missile motions, so many crossing routes, misdirections,” Jason McCourty said. “We talked about it: ‘There’s going to be a time when we get in a second-and-long situation, and we’re going to want to switch it up and throw a blitz at them just so they respect that look,' and they know, ‘Hey, they could be coming.’ Flo (Patriots de facto defensive coordinator Brian Flores) waited until that moment and called an all-out blitz.”

Devin McCourty added: “I think we almost hit them with [the blitz> earlier in the game, and it was on the tip of Flo’s tongue, and he kind of decided not to. The call came in so late. And when I got to the sideline, he said, ‘That was my fault, I gave you that call late.’ And I’m just thinking in my head he probably wanted to blitz and was trying to decide in his mind, ‘Is this the time or not?’”

Though a lot of the credit goes to Flores and the Patriots defense for making and calling the play, it likely would not have come about without Hoyer and all the work he put in ahead of time.