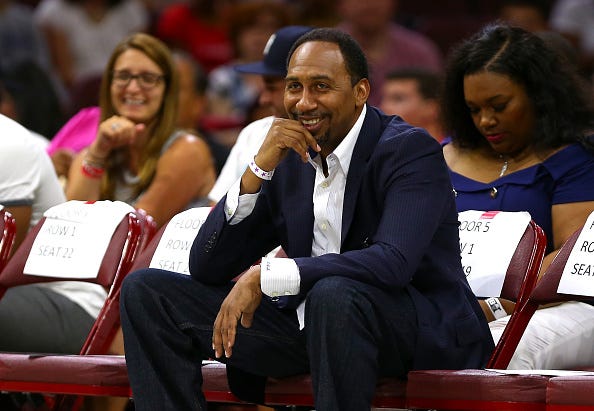 (WEEI) - Stephen A. Smith and Skip Bayless verbally sparred with each other for years over pressing topics such as LeBron James and Tom Brady's place among all-time NFL greats. But all of their heated disagreements came from a place of mutual admiration, at least according to Smith.

In a recent interview with New York broadcaster Michael Kay on YES, Smith said Bayless is the one person in this world with whom he would take into a foxhole. "I mean no disrespect to anybody, but that's my brother," Smith remarked, per the New York Post. "Skip Bayless and I are tight and we're tight in a very different and unorthodox way. You'll never see us hanging together. We might go out to dinner. His definition of a vice is Diet Mountain Dew. That's Skip Bayless, he's a devout Christian. I try to be. So we're very different, but I'll tell you for the purposes of a debate show, that's my man."

Conversely, Smith says he's struggled to adapt to his new debate partner, Max Kellerman. Though they've been together for nearly three years, Smith says it's been an adjustment. Stephen A's frustration with Kellerman is apparent at times, such as when he admonished him several times last year for his anti-Brady crusade. Considering Smith never lashed out at Bayless for his equally silly anti-LeBron rhetoric, the reaction was telling.

"It was a challenge. It still is a challenge. And I say that with all due respect to Max, who I genuinely like," Smith explained. "And here is the only difference between somebody like him and somebody like and various others. Max is the kind of person that genuinely believes this is how he feels. 'And if you don't understand, I have to convince you because you just don't get it, you're not understanding. Because you couldn't possibly disagree with me.' That's Max. Skip and I don't give a damn whether you agree with me or not."

Though Smith may not enjoy sitting next to Kellerman as much, his stock has risen since Bayless left the WorldWide Leader for FS1. Smith is now the highest-paid personality at the network, making close to $10 million per year.

Stephen A. lost his beloved debate partner, but he's made lots of cash. Seems like a decent trade-off.