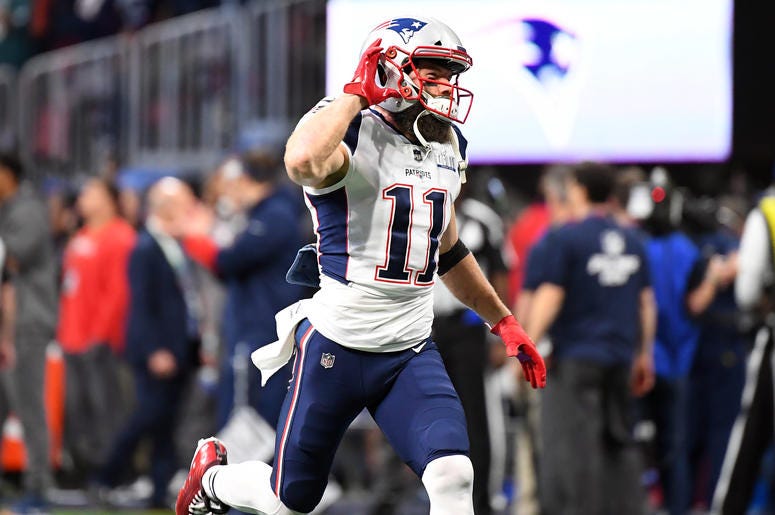 BOSTON (WEEI.com) -- Julian Edelman is vastly underrated, and he’s never been named to a Pro Bowl. But the New England Patriots stalwart is consistently one of the NFL’s best and most dependable wideouts.

Just look at this past season. Edelman missed the first four games due to his suspension for violating the league’s performance-enhancing drug policy, so he only played in 12 regular-season games. If he continued his same pace over 16 games, he would have finished with 99 catches for 1,133 yards and eight touchdowns. That would have been good for 12th in receptions (10th among receivers) and 17th in yards (13th among receivers).

Edelman is best known for his big-game performances. The gritty receiver seems to pick up his play when the games matter most. In the three playoff games, Edelman finished with 26 catches for 388 yards and capped it off by winning MVP honors in Super Bowl LIII.

“Nothing surprises me with Jules," Tom Brady said on "Mut & Callahan" following the AFC divisional round win over the Los Angeles Chargers. "He’s as mentally and as physically tough as anyone that has played for the Patriots. It started with his upbringing and going to junior college and going to Kent State and transferring to the wide receiver position.

“Just worked and grinded. That is just him. That’s all he knows. It is a real blessing for him in a lot of ways. I have been around to see it all happen. I have so much respect and trust in Julian. I am so proud of everything he’s accomplished. It is just really amazing to see.”

How does this compare to other wide receivers?

It isn’t like Edelman signed this contract a long time ago, either.

He signed a two-year extension totaling $11 million in June 2017. This is huge for the Patriots. They are saving money with him and can use that to acquire players at other positions.

This will come into play again this offseason, but it will make things a little tricky as well.

In 2019, the last year of his contract, the 32-year-old is on the books for a base salary of $2 million and has a cap hit of just over $4.5 million. According to Spotrac, he currently is 48th in the NFL in terms of cap hits among wide receivers and 45th in total cash at just under $3 million.

The Patriots will certainly be in the market for receivers. Edelman is the only receiver (besides Matthew Slater) who was on the 53-man roster this past season who is under contract for 2019. Receivers on the open market likely will be getting offers for a lot more than Edelman’s current contract, so will the Patriots want to sign someone who isn’t at Edelman’s skill level and have them be paid more?

New England has shied away from signing a big-name player at the receiver position for some time, but that isn’t because they don’t have the money. Could this offseason change the trend? It’s possible, and Edelman’s current deal is a major reason why.

For all the clutch catches he gets talked about for, it’s time for Edelman to get recognized for his contract. He’s helping the Patriots there, too.