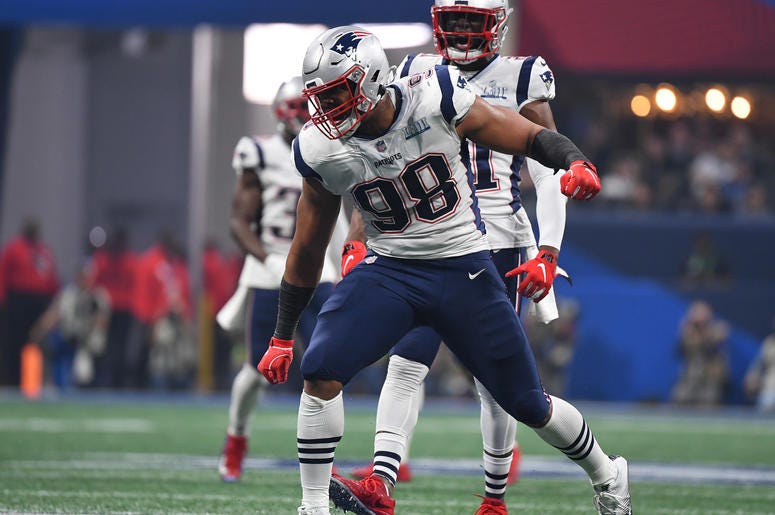 BOSTON (WEEI.com) -- The New England Patriots have a number of pending free agents come next week, and a great deal of them deserve to return.

Some don't have much of a chance to come back because of what their price will be on the open market, but that doesn't mean the Patriots shouldn't check in and do what they can. Unlike in years past, there don't appear to be many true locks among their own free agents to return.

Free agency will officially begin March 13. As a preview, here are the top 10 Patriots free agents whom the team should prioritize bringing back. It is worth noting the Patriots can re-sign these players at any point, and do not need to wait until next Wednesday.

1. DE Trey Flowers: This is a no-brainer. The 26-year-old will be the best defensive end to hit the open market and will get a ton of interest across the league. Flowers plays the Patriots system extremely well and has turned into one of the most dependable players on the entire defense. The Patriots do not have a young and upcoming defensive end behind him, which makes it even more imperative the team does what it can to bring him back. It is going to cost them because of how good he is and how few quality defensive ends are available.

2. K Stephen Gostkowski: The longtime kicker gets criticized for missing kicks in big games, but overall he's one of the top five kickers in the league. Patriots fans have been spoiled over the years and haven't had to deal with worrying about a kicker each and every week, as some teams across the league have to do. The dropoff between Gostkowski and whatever kicker is bought in to potentially replace him makes it worth the Patriots going out of their way to ensure he comes back.

3. OL Trent Brown: This reunion doesn't sound likely given how much money he will get on the open market, but the Patriots should certainly check in. He had a solid season in his first year in New England, but some of that could be because he knew he was in a contract year. There are some who worry his level of play could go down once he gets a new contract. If Brown departs, second-year linemen Isaiah Wynn would take over.

4. OL LaAdrian Waddle: If Brown leaves, the Patriots need to have someone with experience behind Wynn, which is where Waddle comes into play. Waddle has been one of the more underrated players on the team in recent years. He's done a tremendous job when he's been forced into action due to injuries. This is why he's sneaky important to bring back as a veteran insurance policy who knows the system behind Wynn.

5. CB Jonathan Jones: Jones is the only restricted free agent on this list, but the Patriots need to do what it takes to make sure he's back in 2019. Jones' importance was on full display the last two games of the season: the AFC championship and the Super Bowl. In the AFC title game, he helped shut down Kansas City Chiefs speedster Tyreek Hill, and in the Super Bowl, he helped pitch in at safety when Patrick Chung was lost for the game early in the second half. Jones' versatility and ability to play special teams is big.

6. CB Jason McCourty: McCourty won a Super Bowl with his twin brother Devin in his first year in New England. The leadership the two provided in the secondary cannot be overstated and really helped with rookies Keion Crossen and J.C. Jackson. McCourty may have to take less money to return, but the Patriots should at the very least put an offer out there.

7. WR Cordarrelle Patterson: This feels like a long shot, but the Patriots should do their due diligence. Josh McDaniels got the best out of Patterson, perhaps the most of Patterson's six years in the league. He's a valuable player given all the things he can do (receiver, running back, kick returner), but it feels as if another team is about to overpay for his services.

8. WR Phillip Dorsett: Of the three Patriots free agent receivers, we give Dorsett the best chance to return. He clearly had chemistry with Tom Brady, and when Julian Edelman is the only receiver currently slated to return, Brady needs someone else he's comfortable throwing to. This is Dorsett's first time as a free agent, so he will likely explore his options and see what he's worth. The Patriots will likely set a number they feel is right, and if his price is above that, they will move on.

9. P Ryan Allen: Allen is another underrated player who had his best games down the stretch, including in the Super Bowl. Another aspect to consider is his chemistry with long snapper Joe Cardona and Gostkowski in the kicking game: How close he is with those two should not be discounted.

10. LB Albert McClellan: Picked up in the middle of the season, McClellan made a huge impact on special teams, and his arrival seemed to elevate a unit that struggled early in the year. Being 32 years old, he shouldn't demand a huge contract, and not many teams value special teams as much as the Patriots do, which make it an appealing spot for the veteran.