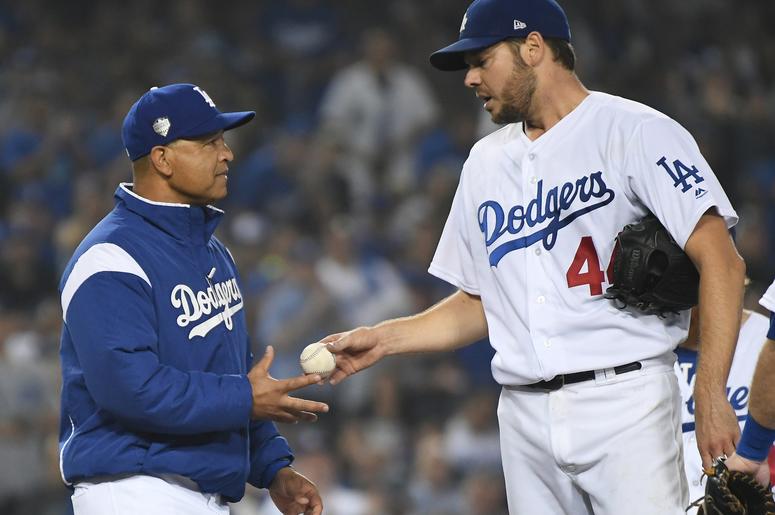 BOSTON (WEEI.com) -- Rich Hill was involved in the most controversial decision of this year's World Series. Obviously, when the President of the United States weighs in, the moment probably is of some significance.

But Los Angeles Dodgers manager Dave Roberts taking out Hill in Game 4 against the Red Sox after 6 1/3 innings of one-hit ball was one thing. The move Roberts and Co. almost made prior to the first pitch, however, might have led to even more head-scratching.

Appearing on the "Bradfo Sho" podcast, Hill revealed that he actually didn't know he was starting Game 4 until the day of the game, with the Dodgers floating the idea that they might use a relief pitcher to kick things off before bringing in the starter.

"There is a rhythm, there is a flow to the game that the starting pitcher gets into and I don’t know if the World Series is necessarily the time to actually … It was up in the air," Hill explained.

The revelation makes sense considering the Dodgers were listing the Game 4 starter as "TBD" after their 18-inning Game 3 win. But sources confirm that the Boston Red Sox -- like most everyone else -- believed that classification was simply Los Angeles' way of responding to Boston not identifying its own Game 4 starter.

Ultimately Hill found out he was starting the morning of the game. He would be replaced after 91 pitches by reliever Scott Alexander, with the Dodgers holding a 4-0 lead. After Alexander walked Brock Holt on four pitches, Ryan Madson came on and proceeded to give up a three-run homer to Mitch Moreland. Steve Pearce tied the game with a homer in the eighth inning, and the Red Sox went on to win, 9-6, scoring all their runs in the final three innings.

"And we’re not talking about the regular season. We’re talking about the World Series," said Hill regarding the idea of starting a reliever. "It is funny because I think that is kind of the part you have to adjust as you get older. My wife and I have been all over the place playing. We’ve been to hell and back and we’re here, so really being affected by pitching or starting or whatever in the World Series is really a minuscule thing compared to many things that are going on. I think that is something I’ve been able to adjust to and understand to just be ready and stay ready. If you have the opportunity and the opportunity comes around and you’re ready you’re going to perform at your best. That doesn’t mean the numbers are going to be the way you want them to but you are going to be able to give your best effort. You are going to be able to give everything you have because you are prepared. That means everything because those opportunities come and go."

He added, "I think that when you get into the World Series and the postseason you can look at numbers, but a lot of that stuff has to go out the window and you have to go with the guys who are obviously being efficient and just going for it. I think that’s the biggest thing."