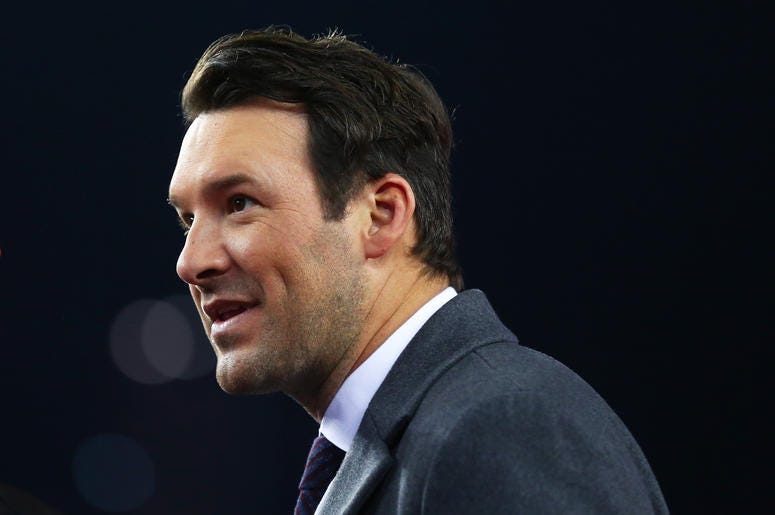 BOSTON (WEEI.com) -- Tony Romo spent large portions of his first Super Bowl broadcast complaining, and at some points openly mocking, the slop on the field that only resembled football in some tangential way.

“This is hard to watch,” he said when Los Angeles Rams punter Johnny Hekker trotted out for the eighth time in eight possessions during the New England Patriots' eventual 13-3 victory.

The ball sailed 65 yards, the longest punt in Super Bowl history. "You were waiting to throw out a stat like that!” Romo yelled at Jim Nantz, who remarkably resembles a real person when bantering with the ex-Cowboys QB, his broadcast partner of two years now.

“This is getting exciting now!” Nantz screamed in response.

In an ironic twist, Romo, whose entire run in the booth has been predicated on his clairvoyance and keen insight, didn’t predict many play calls Sunday. Instead, as the 3-3 game slogged into the fourth quarter, he started deriding the lack of action on the field –– like millions of people at home were doing.

Romo’s faux-jubilation climaxed when Greg Zuerlein hit his first field goal of the night with 2:11 left in the third, putting the Rams on the board for the first time.

Romo’s sarcastic demeanor throughout much of the lowest-scoring Super Bowl ever stood in stark contrast to last postseason, when he heaped praise on the atrocious wild-card game between the Jacksonville Jaguars and Buffalo Bills, in which 13 points were scored in total. At the end of his rookie season in the booth, Romo was at an early crossroads in his career. Though he explained the game better than any other working analyst, his goofiness threatened to lead him into Jon Gruden or late-stage John Madden caricature territory.

There were plenty of “ooh’s and ahh’s” during replays this year, but overall, Romo’s sharp analysis outweighs any fleeting cringeworthy bursts of gibberish. And besides, what’s so bad about a football announcer who gets excited about football?

To quote Joe Tessitore – and yes, that is absolutely the first time that phrase has ever been written – the AFC championship game was Romo’s magnum opus. He correctly predicted nearly every big Patriots play down the stretch, and might have even played a role in the Chiefs firing their defensive coordinator, Bob Sutton, who could not see what Romo did.

His performance in the Super Bowl fell short of that broadcasting masterpiece. There wasn’t enough discussion about de facto Patriots defensive coordinator Brian Flores, who helped architect the game plan that stifled the high-flying Rams. Maybe Romo also got a little too caught up in bemoaning the boring play on the field in second half, causing him to overlook what the Patriots were actually doing to shut down Sean McVay’s Super Bowl game plan.

But Romo still explained the nuances of the game more articulately and cleanly than anybody else out there. As a viewer, I understand football better when Romo is behind the microphone. That was once again true Sunday at various points.

In the immediate aftermath of Tom Brady's opening-drive interception, Romo mentioned the Rams switched to zone after initially showing man-to-man. It fooled Brady, and he did not see Nickell Robey-Coleman, who knocked the ball into Corey Littleton's hands.

For all of the praise Romo receives about his prescience, his greatest attribute is actually explaining why something happened. It’s a simple concept, but few of his cohorts do it with any consistency. When Kyle Van Noy sacked Jared Goff for a big 14-yard loss, Romo pointed out the Patriots played two safeties, sniffing out the play-action. Goff had nowhere to throw the ball.

Most impressively, Romo even makes the minutiae accessible for the laymen at home, such as why the Rams were waiting out the play clock even while they were down by 10 points midway through the fourth quarter. When the play clock gets past 15 seconds, coaches can no longer communicate with their players on the field. Romo said McVay probably didn’t want to give Belichick the option to call an audible from the sidelines, so the Rams slowed down the pace.

Romo did not the sniff the Super Bowl as a player, which he joked about when Nantz welcomed him to the big game at the top of the telecast. But as a broadcaster, he promises to be a Super Bowl stalwart.

He did not fumble the snap in his opening act. And if the Rams did, he certainly would’ve laughed about it.