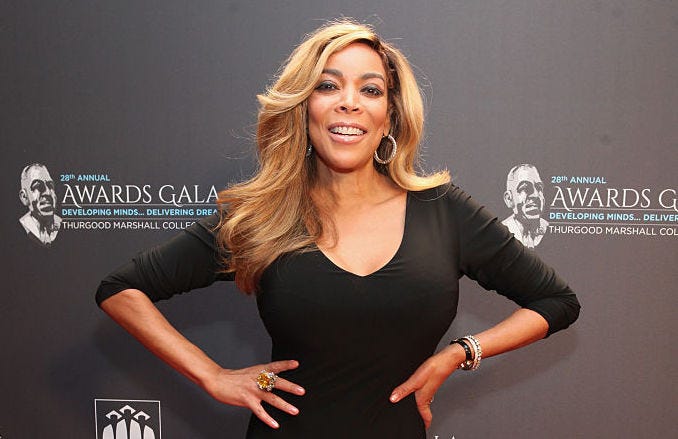 After a few cryptic Instagrams and teases on her show, Wendy Williams has stirred up speculation that she could be dating someone new after her brutal split from Kevin Hunter, her husband of 21 years. The mystery man has been identified as 27-year-old Marc Tomblin.

It all began with a few comments she made on "The Wendy Williams Show" just one month post-divorce. "I am reclaiming my life," she says. She continues by adding, "I don't have a boyfriend, but I must admit, I am rediscovering my love of men."

Fast forward to last week, Williams took to Instagram showing a photo of her seemingly out on a date. The image only shows Williams’ hand alongside that of an unidentifiable stranger, but the comments section immediately blew up with speculation.

A couple days later, Williams posted a second photo, which showed her snuggling up against a stranger’s leg. The hashtags are very telling about her new relationship. They read, “#oldenoughtobeyourmother #verysexyman #mynewlife.”

Last night was the most beautiful sunset in Sherman Oaks with special people. Thank you, California! You've won me over! I'll be back for the Hip Hop Festival in August! #92.3 #oldenoughtobeyourmother #verysexyman #mynewlife

On Tuesday, the two were spotted strolling around New York City while shopping and going on a dinner date, and the mystery man was identified. Fans of the TV star are concerned as Tomblin’s past criminal record comes to light.

According to TMZ, Williams has revealed that she’s always been aware of her new man’s past, and it doesn’t bother her, and she’d just like to live her life.

Access reports that aside from his criminal record, Tomblin is also a financial investor and blogger. Speculation from fans grow as rumors begin to circulate that Williams' only motivation for dating someone new is to make her ex jealous. Regardless of the motives, Williams continues to make choices that feel right for her as she moves on from a brutal divorce process.