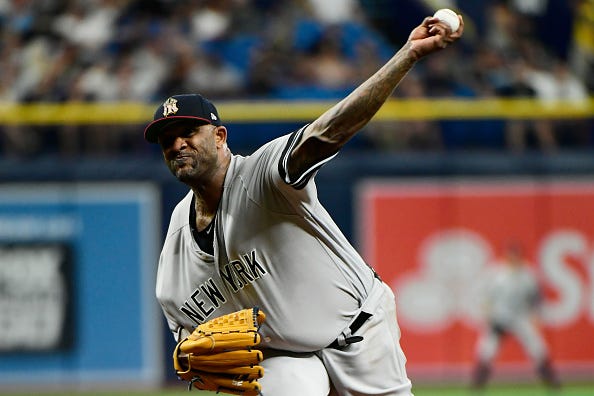 The Yankees have the best record in the American League, and Sabathia has still put up some decent numbers (4.04 ERA, 66 strikeouts) at age 38. He won't be going to the All-Star Game as a player, but the former Cleveland Indian will still be honored by the league on Tuesday night.

"We are delighted that CC and his family will join us in Cleveland, where his Major League career began," Commissioner Robert Manfred said in a statement. "We look forward to celebrating his many accomplishments during our All-Star Game festivities."

Sabathia should receive a nice ovation from the crowd he spent much of his career playing in front of. The California native was drafted by Cleveland with the 20th pick in the first round of the 1998 MLB draft. Sabathia won the 2007 Cy Young award with the Indians, and spent seven and a half years with the team before he was traded to Milwaukee midseason in 2008. He then signed with the Yankees in free agency after that season.

Sabathia won a World Series title with New York in 2009. He picked up his 250th career win back in June against Tampa Bay.

DJ LeMahieu, Gary Sanchez, Aroldis Chapman and Gleyber Torres will all be representing the Yankees on the field of play during Tuesday night's All-Star Game.

Sabathia deserves the honor. He could be a future Hall of Famer and has always been a great representative of the league and the sport.