(WFAN) -- The label of franchise player is sometimes thrown around lightly, but the Rangers undoubtedly have one in Kaapo Kakko. If the Devils surprised very few by drafting American center Jack Hughes first overall, then the Rangers' selection of Kakko at second overall was an absolute no-brainer.

Rangers fans will absolutely love this pick. The Blueshirts accelerated their rebuild by trading for No. 1 defenseman Jacob Trouba. Despite being an 18-year-old, Kakko possesses an NHL-ready body, and a majority of analysts believe he can step right in and dominate.

The Rangers plan to be an aggressive team this offseason. Kakko's arrival is perfect timing for the upward-thinking Blueshirts. His combination of advanced hockey IQ, pure strength, silky hands, shiftiness and straight-line acceleration makes him a very difficult forward to defend.

Elite players in the league typically have a hot spot on the ice. For Washington Capitals superstar Alex Ovechkin, it's the top of the left circle. Kakko loves setting up in the right circle. There, he's a threat to rocket powerful one-timers and can set up teammates with aplomb. 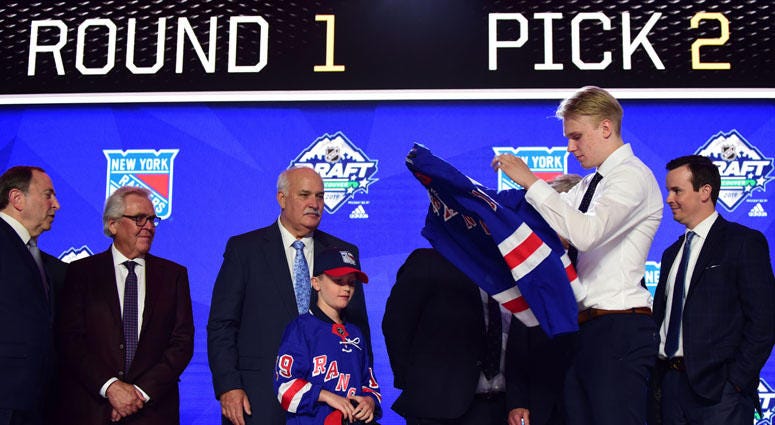 Kakko's shiftiness and elusiveness in tight areas will give him a leg up compared to other NHL rookies. He relishes the idea of exploiting the smallest of windows and knows how to use his 6-foot-2, 194-pound frame win net-front real estate.

Kakko finished the tournament with seven points (six goals, one assist). Everyone was raving about his natural confidence and calmness under pressure.

Fans erupted in joyous celebrations when the pick was announced at the Rangers' viewing party at Madison Square Garden. Consider that moment a sign of things to come. This kid is going to bring fans out of their seats on the regular and make the Garden roar.