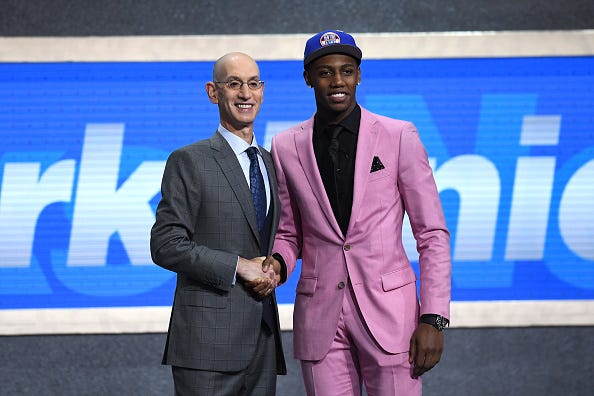 (WFAN) -- The Knicks just had the worst season (tied with 2015) in franchise history, winning a paltry 17 games. Their reward was the third overall pick in the NBA Draft. At this point in their rebuild, it was essential for the Knicks to pick the right player and they think they did when they drafted one of the most productive freshmen in the history of college basketball, Duke's RJ Barrett.

There's a lot to Barrett's game and background, which I detailed in my 2000 word scouting report here and given his combination of traits, skills, background and upside, he was the right selection by the Knicks. Of all the players remaining on the board, he had the best chance of becoming a team's lead initiator and a two-way player.

The Knicks, lacking anyone resembling a potential lead offensive initiator or scorer, had to bet on upside. That doesn't mean Barrett doesn't have a lot of development to do considering the holes in his game that could hold him back from ever becoming an efficient scorer or All-Star level player. He might have been the right pick but he is not the savior riding in on a white horse. It will take time.

There is no guarantee that Barrett will be a better player than the likes of Jarrett Culver or Darius Garland, but his pedigree should give the Knicks confidence. His father played at St. John's and overseas and Steve Nash is his godfather. He had great success in high school in Florida, playing in FIBA for Canada and at Duke. There are no questions about his work ethic, alpha mentality or ability to handle the New York spotlight.

According to Tommy Beer, at Duke, Barrett became the first ever collegian to total 850 points, 250 rebounds, and 150 assists in a season. He also joined Kevin Durant, Michael Beasley, and Trae Young as the only freshmen to ever score more than 850 points. The problem is he compiled those numbers relatively inefficiently, especially in the half court.

Barrett shot only 66% from the free throw line, 31% from behind the arc and 45% from the field. His jumper was inconsistent, and he struggled to get separation on drives and explode to finish at the basket in half-court settings. He generally played below the rim in the half-court and lacked elite side-to-side wiggle to get past his primary defender. His personal coach, well-known NBA trainer Drew Hanlen, has said in recent interviews with Ian Begley and Mike Vorkunov that shooting and side-to-side agility are two things he is working on improving.

Hanlen is tweaking Barrett's form on his jump shot, and Knicks General Manager Scott Perry said this about whether he can improve as a three-point shooter on MSG after the draft (courtesy of Chris Iseman): "He has the form and the mechanics that we felt very confident with a lot of work and repetition with our development, our coaching staff, that it's something that's very attainable for him."

Even though superior NBA spacing might help Barrett get better looks, with his lack of explosive half-court athleticism and burst, the only way he can become an efficient scorer is if he substantially improves his pull up jumper off the dribble, and three-point shot. Otherwise, defenders will sag off him, and there are reasons to worry his "bully ball" tendencies that he used to score around the rim in college won't work on the bigger and more athletic defenders in the NBA. Barrett does have elite body control, including a euro-step that should help him get shots off in the NBA and score on drives. 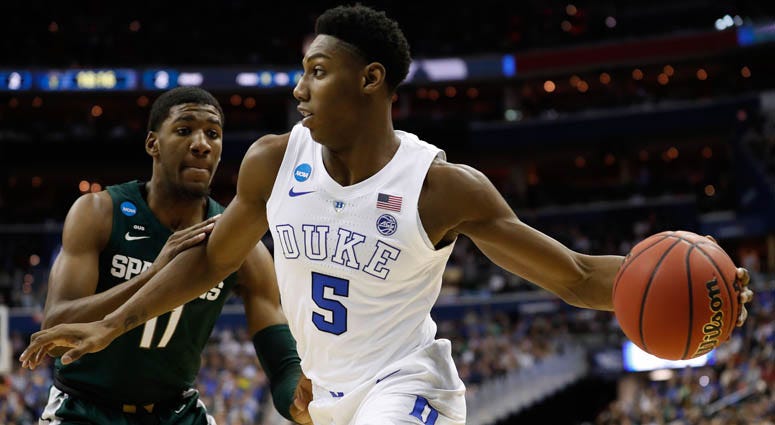 Barrett had two other tendencies in college that will drive Knicks fans (and coaches) crazy if he doesn't correct them. Despite displaying excellent vision from time to time, Barrett routinely got tunnel vision for the basket and took low-percentage shots while passing up open teammates.

He has an NBA body at 6'7 and more than 200 pounds but often looks disinterested on defense when playing off the ball. He gets caught watching a lot and doesn't do a good job getting through screens.

Tendencies like those can be difficult, but not impossible for players to alter. Sometimes they are so ingrained in their basketball instincts that it can't be coached out of them. Having great confidence and no fear to take the big shot is a good thing unless it leads to poor shot selection, which can be the case with Barrett. The Knicks are betting his work ethic and coachable nature will allow these two parts of his game to come along.

Knicks fans should temper their enthusiasm and expectations that Barrett will be able to be an efficient offensive creator that the Knicks can effectively run their offense through when he is just 19 years old. It will be inefficient and get ugly quickly. The front office would help him a lot by getting another primary ball-handler that Barrett can play off of so he doesn't have to feel the pressure of carrying the offense, which might exacerbate some of his bad tendencies.

It will also be on head coach David FIzdale to be hard on him to fix those issues, something he didn't seem to be great at with some of the young players from a year ago. Like with all 19-year-olds, it will take time for Barrett to reach his full potential. Knicks fans are going to have to be patient. He is a talented teenager that has a long way to go before becoming a high-level NBA player, and there's no guarantee he gets there.

The Knicks used cash to trade up from the 55th to the 47th pick in the draft to select Michigan freshman wing Ignas Brazdeikis, a Lithuanian who was the second-leading scorer on RJ Barrett's Canadian FIBA team. He can shoot, hitting 39% of his threes, cuts well off the ball and plays hard, but he is limited athletically and defensively. He averaged 14.8 points and 5.4 rebounds per game for the Wolverines as a freshman.

The Knicks have also reportedly signed UCLA sophomore guard Kris Wilkes to a two-way contract. He is 6'8 and can score but is considered by many as a bit of an under-achiever. He averaged 17.4 points as a sophomore on 43% from the field and 33% from behind the arc. He had more turnovers than assists as a sophomore.

The Knicks also added Amir Hinton from Division II Shaw University where he averaged 29 points, 5 rebounds and 4 assists. He is supposed to be a good athlete that plays very little defense. The Knicks seemed to gravitate to players like that last season, so we'll see how he fits in. Kadeem Allen and Wilkes own the Knicks two-way contracts, so Hinton can only take one of those spots if the Knicks elevate Allen to a full NBA deal.

The Knicks were rumored to be attempting to trade Frank Ntilikina on draft night for a second round pick, but they couldn't find a taker. It seems like the organization has soured on Ntilikina and it would not be a surprise that he has played his last game as a Knick. The Knicks don't seem to realize if he just becomes an average three-point shooter, he will be a good rotation player for any team in the league. If the Knicks need to generate more cap space he will be the first one out the door.

You can follow me on Twitter at twitter.com/schmeelk for everything Knicks and Giants. Check out my Knicks podcast, The Bank Shot, which you can find on most podcast platforms. You can subscribe on Apple Podcasts here. My most recent episode is a draft review with Spencer Pearlman and Ben Rubin of The Stepien which you can listen to on WFAN.com.