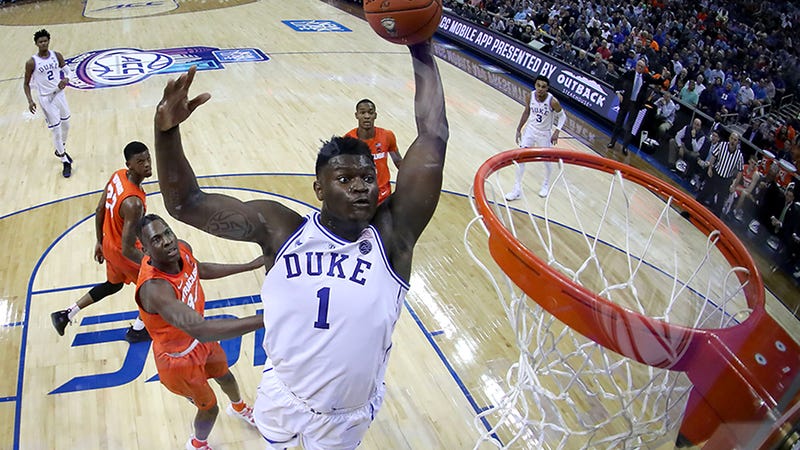 In the end, however, the story of the night was only one thing: the return of Zion Williamson.

After missing the past five games due to a knee injury he suffered while blowing out his shoe against UNC on Feb. 20, many in the media believed Williamson shouldn’t play another college game.

Williamson didn't miss a beat from his time off, scoring 29 points on a perfect 13-of-13 shooting from the field, to go along with 14 rebounds, five steals and five dunks.

Williamson tied UNC's Brad Daugherty for the most consecutive makes in a game by an ACC player, and also became the first Duke player with 25 points, 10 rebounds and five steals in a game since Christian Laettner did it in 1992 against UNC in the ACC tournament.

"The shoes were incredible tonight," Williamson said with a smile. “I just know they're a little stronger than the regular Kyrie 4's, so I want to thank Nike for making these, but they felt very comfortable.”

Williamson will finally be a part of what is considered to be the best rivalry in college basketball with UNC. He only got to experience 36 seconds of the first meeting before the mishap with his shoe.

"I'm very excited just to be a part of the game and going to compete," Williamson said.

Coach Mike Krzyzewski was obviously excited to have his big star back on the court for the No. 5-ranked Blue Devils.

"We're obviously really pleased to advance. We still don't have our full team back, but getting Zion back after missing almost a month is huge," he said.

In the first game of the night, North Carolina (27-5) entered as one of the hottest teams in college basketball over the past two months -- their only loss came to Virginia on Feb. 11.

"I talk to them all the time about enjoying the moment, enjoy the journey and we're playing tonight," UNC head coach Roy Williams said. "So we want to win. Winning this thing is one of our goals. It's not the only one and it's not the biggest one, but I've never been to an ACC tournament where I didn't really want to win."

North Carolina will have the chance to disprove the doubters who put an asterisk on their wins against the Zion-less Blue Devils (27-5).

"I think we got better, and if you look -- and I really believe this -- I believe almost all of our teams have gotten better down the stretch," Williams said. "The second half of the conference season, I would think our record's probably about as good as anybody’s."

“There are some nerves that come into ACC tournament," Duke freshman guard Tre Jones said. "Obviously, it's our first time. It's a win-or-go-home situation. But we were able to come out with a lot of energy, play the way we like to play at the start of the game and it just fell off our main game, but it's a lot of fun playing games like these."