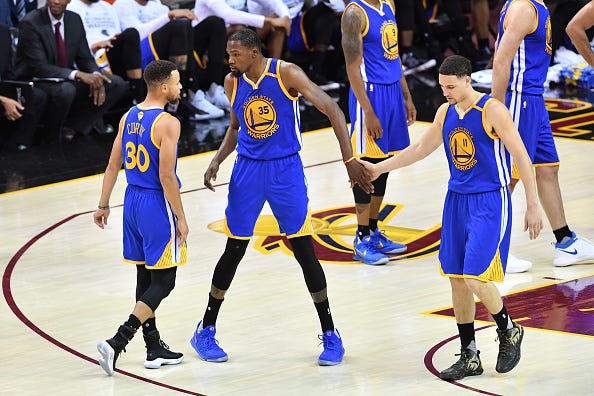 Faced with devastating injuries and the threat of a free agent departure widely blamed for their NBA title loss to the Toronto Raptors, the future is uncertain for the once-dominant Golden State Warriors.

In the most recent episode of RADIO.COM’s “Big Time Basketball” podcast, co-hosts Brian Scalabrine and Matt Steinmetz look ahead to what the Warriors can do next following Klay Thompson’s torn ACL and Kevin Durant’s likely exit, two factors that Scalabrine notes have “changed the entire landscape of the NBA” next season.

The guys dig into the risks facing the Warriors and what a lack of depth in the face of a hungry and competitive Western Conference means for remaining stars Steph Curry and Draymond Green.

“Now that we’re starting to see these guys are dropping like flies, how much load management are we going to have to see from the Warriors moving forward?” Scalabrine asked.

Scalabrine and Steinmetz left open the possibility that without Durant and Thompson, the chances of a Golden State playoffs bid is grim.

The pair also discussed how Steph Curry has changed basketball, with Scalabrine pitching a new stat — overreactions — where Curry thrives.