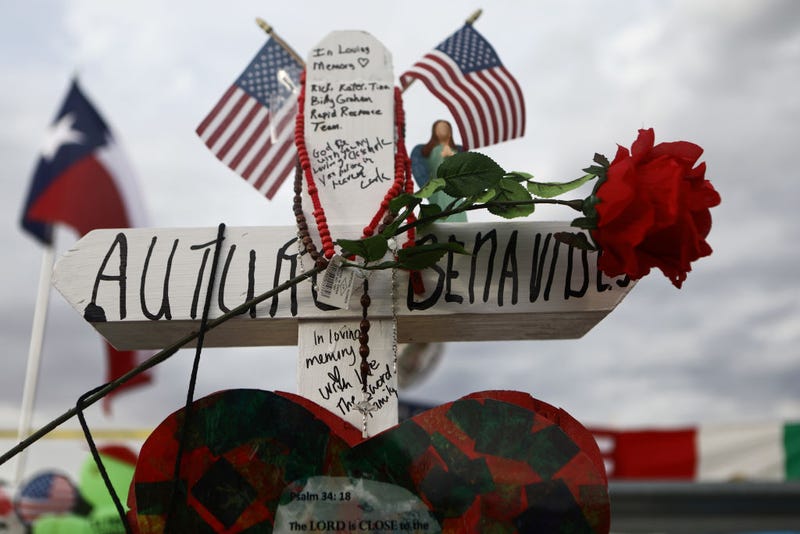 A wooden cross painted white stands at a makeshift memorial outside a Texas memorial, along with nearly two dozen others.

Two American flags are taped to this cross, a small angel figure stands, hands together in prayer. Three rosaries hang around the cross and a red rose is threaded through them.

Written in black on the cross is the name Arturo Benavides. Small notes of love, faith and remembrance are scrawled up and down the cross.

The cross for Benavides, 60, stands outside a Walmart, near the scene of a mass shooting that left 22 people dead on Aug. 6 in El Paso, Texas.

On Friday, Benavides' wife, Patricia, filed a lawsuit against Walmart and the shooter.

On the morning of the shooting, Patricia and her husband of more than 30 years were running errands at the Walmart on Gateway Boulevard. When they finished shopping, Benavides went to the checkout line to pay, and Patricia left the line to find a place to sit and rest.

Patricia was sitting on a bench a the front of the store when the gunman entered the store and opened fire on customers inside. Patricia was pushed into a stall in a nearby restroom, where she was able to escape. But Benavides, still standing in line with their groceries, was shot and killed.

Benavides served in the Army and was a staff sergeant in the Texas Army National Guard. He was a "family man" a news release from Patricia's lawyers says, who "cared about his family deeply and would take the time to call them on a weekly basis to see how they were doing."

The lawsuit claims that Walmart knew about other shootings at its stores in Texas and across the country and "had a duty to have security guards and other security members at its stores to discourage such shootings and to engage any shooter that may attempt to harm employees or customers.

"Although (Walmart has) security guards at some of their stores, the location in El Paso where Mr. Benavides and others were killed did not appear to have any."

Patricia is seeking more than $1 million, the lawsuit says, including medical and funeral expenses.

Randy Hargrove, the Senior Director of National Media Relations for Walmart, responded to the lawsuit saying “we will never forget this tragic event, and our condolences continue to go out to everyone who was affected. Safety is a top priority and we care deeply about our associates and customers. We will respond as appropriate with the court."

Walmart also filed a cross-claim this week against the shooter, placing full blame on him alone for “a campaign of violence and murder. That loss of life and harm were caused intentionally and solely” by the shooter, the claim reads.