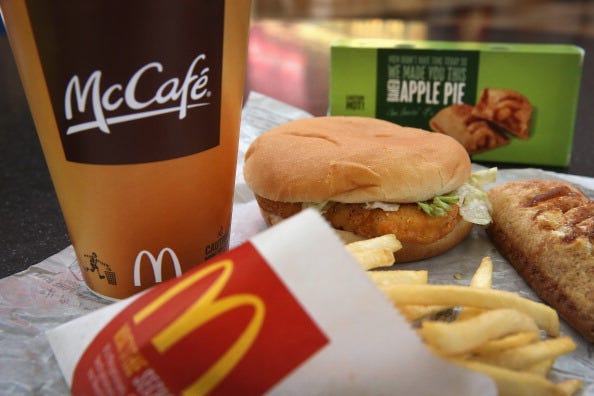 The Happy Meal was not on the menu.

A Connecticut woman was so displeased with her McDonald’s order that she assaulted one of the restaurant’s pregnant employees, reported The Smoking Gun.

According to the police, the altercation occurred after Shanelle Hanson pulled up to the drive-thru window and ordered a McChicken sandwich that was not made to her liking.

The 21-year-old then proceeded to enter the restaurant and demanded a refund because “her food was made wrong.”

After receiving her money back, Hanson insisted she get a new sandwich and that she be allowed to make it herself.

Hanson, who admitted to throwing money in the manager’s face, then charged behind the counter and allegedly got physical.

“She got into my face and slapped me,” the 29-weeks pregnant manager told police.

A male restaurant employee tried to break them up and was also slapped and pushed by Hanson.

Hanson was allegedly told that the manager was pregnant prior to the attack, but it didn’t sway her actions.  According to the manager, Hanson said she “had bail money” and that she hoped she’d lose the child.

Hanson later told police she was unhappy with her order because it was missing the lettuce and mayonnaise that normally comes with a McChicken sandwich.

Security footage failed to capture the alleged physical altercation, which occurred behind the counter.

Hanson was charged with two misdemeanors, breach of peace, and assaulting a pregnant woman. She was released on $5,000 bond and is set to be arraigned on June 13th.

If you want to have it your way, better go to Burger King.