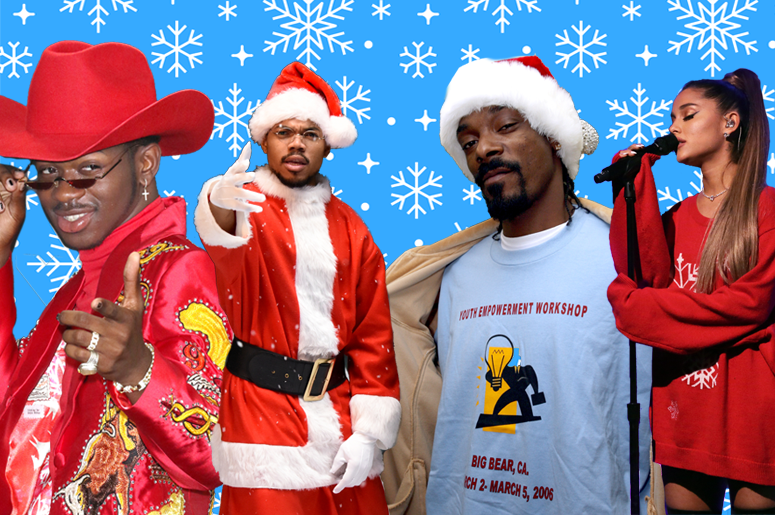 Look, we know it’s November and we still have Thanksgiving to get through, lol we mean enjoy. We can’t help but get all jolly for Christmas, especially with a playlist this turnt.

Straying from the usual Christmas go-to's, we’ve put together a list of songs that will no doubt have you shimming just like Santa Claus down the chimney. While some you might already know, others you might be unwrapping for the very first time.

Heads up though, this is not your grandma's Christmas playlist. So do us a favor and glance around the already holiday decorated room before blasting these Yuletide tunes from Christmas past, present and (kind of) future. Enjoy! And keep it turnt.

1 Ariana Grande - Wit It This Christmas

Since this track just dropped, and Christmas isn’t until next month, were treating it as a Christmas song of the future, so play along. “Holiday” is sure to be another chart topping hit for Nas. Besides the fitting title, the festively synthy beat alone is enough to warrant it a rightful place on this playlist.
(Released in 2020)

3 Megan Trainor - My Kind of Present

Known for her cheerful bops, Megan’s love of Christmas led her to put out an entire album of holiday tunes. “My Kind of Present” happens to be track number one on A Very Trainor Christmas, and coincidentally number one in hearts as well, but number 3 on this playlist.
(Released in 2020)

4 Chance The Rapper & Jeremih - Down With That

Merry Christmas Lil' Mama Re-Wrapped delivered us a handful of feel good Hip Hop Christmas tracks, one of which is number 4 on our list, “Down With That.” An easy-flowing bop about spending the holidays in your hometown with that special someone.
(Released in 2017)

Have you been naughty or nice? By the sounds of this newly released song we are presently rocking to, Liam and Dixie have landed themselves on the former. And to tell you the truth, we’re kind of here for it, actually we might just follow suit. Here’s to a lump of coal in the stocking, sorry Santa (insert shrug emoji).
(Released in 2020)

There’s the old Kanye, the new Kanye and then there’s Christmas Kanye.
(Released in 2010)

Who didn’t leave the theater after watching Pitch Perfect 2 wanting this jolly bop in their music library. That was rhetorical of course. This epic mash-up we didn’t know we needed, but now cant live without helps makes the holiday season even more aca-mazing then it already is.
(Released in 2015)

As we near the end, we give you the Lil Jon classic, “All I Really Want For Christmas.” This festive jaunt is sure to get any party of one or more up on their feet. Also it feature the Kool-Aid Man so basically it’s a guaranteed smash (lol get it, because he smashes through walls).
(Released in 2018)

Closing this playlist out with a bang is this Christmas Trap gem. Sure to turn any party into a partayyyy. “Deck The Club” should be a must on any holiday playlist of the past, present and future. Aaa-yuppp!
(Released in 2008)