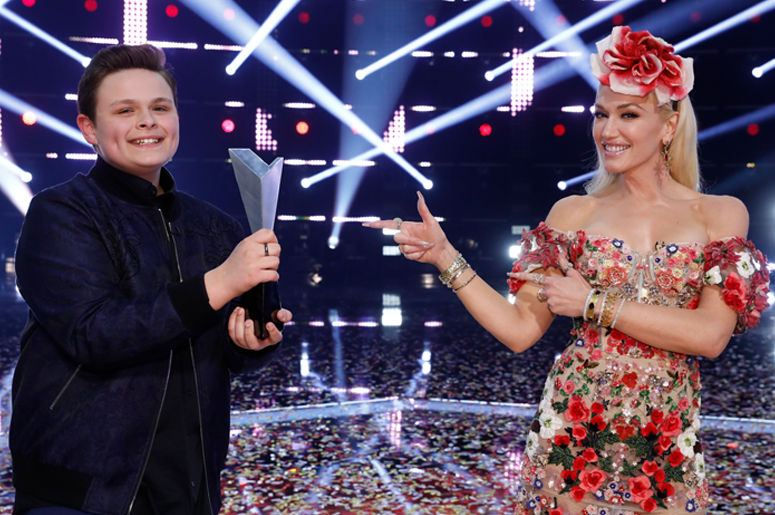 What could be better than winning The Voice? We know! Beating your fiancé while doing it. After her fifth nonconsecutive stint as coach, last night Gwen Stefani won the 19th season finale. Of course Gwen’s team member and contestant Carter Rubin was the one crowned with the title, but Gwen is no doubt the one who got him there.

And even though every coach says this every season, Gwen saw this win coming. "Blake won last season, but I’m back this season and I’m going to get a win," Stefani said during the season premiere.

Following her epic win, Gwen took to her Instagram in celebration and overjoyed confusion. "We're trying to understand what is happening right now and we aren't even supposed to be close to each other,” she said in the clip, which she simply captioned, “omg we won !”

As for the winning contestant, at 15 years old, Carter has become the youngest male winner ever on The Voice. When his name was called, a speechless Rubin buried his face in his hands as Stefani joined her champion while repeatedly yelling, "You won!,” as he shook his head in disbelief. Still at at a loss for words, Carter made sure to thank his fans and let them know that “words will come later.”

After the confetti settled Gwen even did a bit of gloating at the expense of her fellow judge and fiancé Blake Shelton. Posting on her IG story, "I just beat Blake Shelton at The Voice, okay? Just so you know," she said in the 10-second video, before turning the camera to Blake who replied, "This show is rigged.”

Blake Shelton claims the voice is rigged after losing to Gwen Stefani😭 pic.twitter.com/ywTHBYRJRH

However bitter he might be, the GRAMMY-nominated Country star took to Twitter to congratulate his fiancée. "Congrats on the win @gwenstefani!" he tweeted, "I'll let this one slide! @carterrubin… if anyone beat #TeamBlake, I'm glad it's you!!!!”

Congrats on the win @gwenstefani! I’ll let this one slide! @carterjrubin... if anyone beat #TeamBlake, I’m glad it’s you!!!! https://t.co/00xIhdIhoe

With that said, singing competitions aside, we all know both Gwen and Blake are winners of life this year, as they just got engaged this past October. So if you ask us, we’re all winners here, yeah even us, not sure how, but just go with it.

The Voice will return for season 20, minus Stefani, but with the addition of Nick Jonas in 2021.