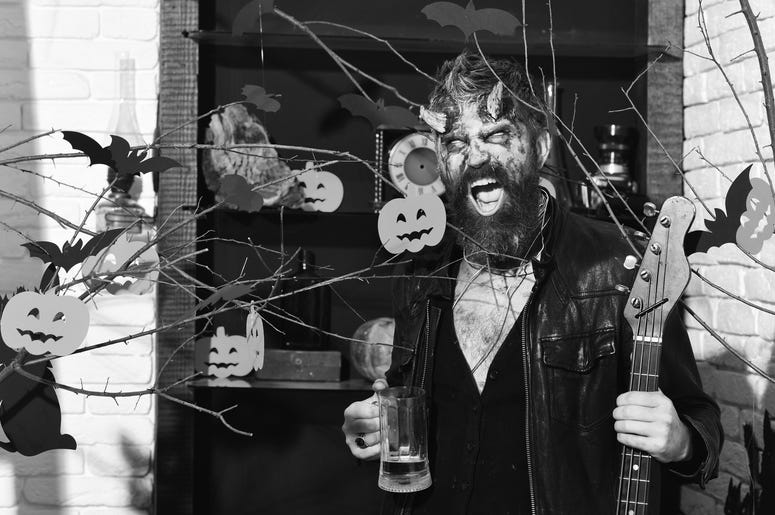 With Halloween now just days away, we're thinking about all of the amazingly horrific metal music that so perfectly works this time of year. Seriously, is there nothing better than a dark, angry, haunting track to get you ready to scare the living daylight out of the neighborhood kids and that super-annoying old lady who lives down the street? Nah, we didn't think so!

So, without any further delay, here are our unlucky 13 horrifyingly haunted Halloween songs that you need to add to your spooktacular playlist immediately.

Full disclosure: this is not the only time you'll see Mr. Zombie's name on our little list here. However, it is first on the list because this song not only totally kicks a** and melts faces, but it's also the title track on the soundtrack of Zombie's directorial debut horror film -- even though it technically first appeared on his 2001 album The Sinister Urge. Either way, this song helped cement Rob Zombie's place in horror icon darkness.

No doubt this one scared the f*ck out of Annie Lennox. Leave it to Manson to take an 80's synth pop hit and turn it into a soundtrack to terror! Despite having to fight the label to release it, this cover proved to be Marilyn Manson's first hit. It would also go on to have one of the most terrifying music videos ever made. Enjoy, kids:

A number of Misfits songs could also easily be on this Halloween must-listen-to list. But, it's our list and we wanted "Scream!," so you're going to deal with it. The song was originally written for a Wes Craven film before being pitched for the Scream 2 film. It eventually found its way to the band's Famous Monsters album and got a living dead music video directed by horror icon George A. Romero.

Anyone who's followed these guys knows they've never hidden their soft-spot for horror films. In fact, this song was inspired by cult horror movies of the 70s and 80s. In-between "96 Quite Bitter Beings" and "Hellions on Parade," "Escape from Hellview" is the second song of a trilogy of CKY tracks about the fictional town of Hellview, where strangers are never safe.

"A Little Piece of Heaven" is one of the most horrifying tracks we’ve ever heard. The 8-minute cult favorite disguises itself with a sweet name before launching you into the creepiest “love story” ever. The Danny Elfman-like song tells the story of a couple that ends up murdering each other before marrying "for the rest of their unnatural lives." How sweet!

There are probably a number of Ozzy songs that serve as good nightmare fuel, but this one in particular is super creepy. It's a song about occultist Aleister Crowley, who in addition to being a writer, magician, and explorer also started the religion of Thelema. You may not be familiar with Thelema, but you probably know of the many of the things it led to like Wicca, Modern Paganism, Chaos Magick, Justin Bieber, Satanism, and Scientology.

As the story goes, metal gods Iron Maiden wrote this little ditty after bassist Steve Harris had a nightmare following an evening of watching the 1978 film Damien: Omen II. Of course, biblically, the number of the beast is 666 and is the symbol of the Antichrist. FUN FACT: Hexakosioihexekontahexaphobia is the fear of the number 666. So, watch out hexakosioihexekontahexaphobes:

Trent Reznor wants to f*ck you like an animal. If that isn't terrifying, we don't know what is. Between the song and the video there is an awful lot to be scared of, but despite Reznor's denial of it being a song about sex it's actually regarded as one sexiest songs of all time. Personally, we think it takes a very specific type of person to find "Closer" to be sexy.

You’ll never guess what this song is based off of. That’s right. The Dr Jekyll and Mr Hyde-inspired track is a ferocious song that returns to a recurring theme of being controlled by demons. We seriously wouldn't advise getting on Ivan Moody’s bad side after hearing this song.

You can find this hauntingly introspective track on the self-titled, Rick Rubin-produced debut Danzig album. Interestingly, while it seems like a total horror song, it's actually more about taking a look in the mirror and seeing the darker side of yourself. Pretty deep stuff from the heavy metal icons.

We are talking about a group of dudes who wear masks even when it's not Halloween, so, yeah, Slipknot makes this list. The second single off the band's fifth album has a little terror, a little darkness, and a little bit of everything that makes a song scary. Of course it's the suicide-themed music video set inside the walls of an asylum that makes this track particularly terrifying.

You guys don't even know how close this list came to being a Rob Zombie/White Zombie discography. Luckily, we picked only our second favorite sampling of Zombie's special kind of terror. Something about the first single from 1995's Astro-Creep: 2000 just makes us jumpy. Maybe it's the frantic video, maybe it's the beat, or maybe it's Zombie's always-kind-of-scary voice. Who knows!

Aaaand finally Marilyn Manson brings this list to a close with another cover. But what is most haunting about this recently-released track is that some of you may recognize "Cry Little Sister" as the theme song to the 1987 cult classic film The Lost Boys...  "Maggots, Michael. You're eating maggots." Ahh, memories!