It really was a quintessential game of baseball for the year 2019.

In Game 1 of this Yankees-Twins AL Division Series, there were five home runs, 25 strikeouts and 13 pitchers used in a contest that lasted well over four hours and followed quite a few of the trends that this season set. Both starting pitchers exited early, and thus, as we knew this series would, it came down to the relievers.

The war isn’t yet won, but it’s advantage Yankees, who won 10-4, after the first battle of the bullpens.

Much of the discussion in New York entering this umpteenth Yankees-Twins ALDS was about who manager Aaron Boone would give the ball to on the opening night of October baseball in the Bronx. James Paxton deservedly got the nod. 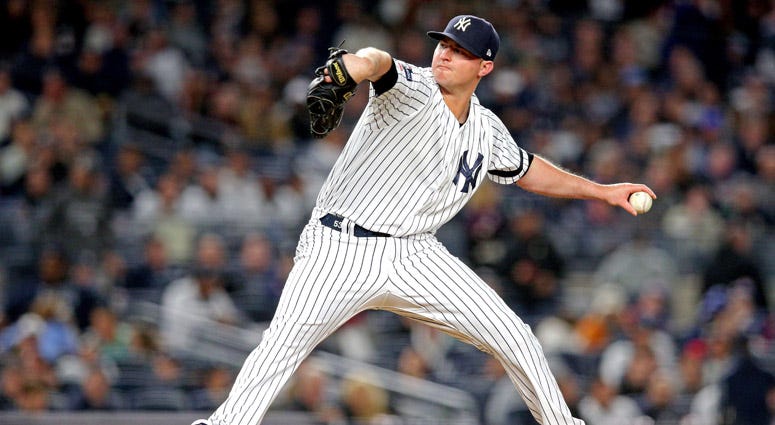 Paxton has looked like an ace for large portions of the second half of the season after he struggled heavily back in the spring and early days of summer. He didn’t look exactly ace-like during his 4 2/3 innings of work Friday night, but it didn’t really matter. As they have done quite often in 2019, the Yankees bullpen was up to shouldering the load.

There were worried gasps in the crowd when the 30-year-old Canadian gave up a home run to Jorge Polanco, just the second batter he faced. But as was the case with each of the three dingers Minnesota hit, nobody was on base. Damage limitation is the name of the game for Yankees starters who have such a potent offense backing them up.

Paxton went into the box score with just three runs allowed despite the iffy start, and his counterpart Jose Berrios didn’t have his A-game, either.

For all we’ve heard about New York’s bullpen this year, Minnesota has a pretty decent one of its own, especially after some midseason trades brought a couple fresh arms to the Twin Cities. Manager Rocco Baldelli wasn’t afraid to trust his relievers early in the game, but maybe he should’ve been.

To start the fifth inning, Berrios was yanked for Zack Littell, a former Yankees minor leaguer. Littell clearly wasn’t up for the moment, as he promptly walked Aaron Judge, threw a wild pitch and then hit Brett Gardner. Littell came out in favor of Tyler Duffey, who started well. The right-hander struck Edwin Encarnacion out, but then he walked Giancarlo Stanton to load the bases for one of the most clutch hitters in baseball.

Gleyber Torres loves hitting with runners in scoring position, and he stepped up and smoked one down the third-base line that was too hot for Miguel Sano to handle. The Bombers went up 5-3 and wouldn’t relinquish the lead after that.

Where Littell, Duffey and later Cody Stashak and Kyle Gibson failed, Chad Green, Zack Britton and J.A. Happ succeeded. Those three and Aroldis Chapman combined to throw 3 2/3 scoreless innings, which were all the Yankees offensive juggernaut needed to put the game out of reach.

Boone’s team followed up that breakthrough fifth with two runs in the sixth and three more in the seventh against the aforementioned Stashak and Gibson. Even for a team that hits homers like the Twins do, it was always going to be a tough ask for them to keep up with that offensive pace while facing such a strong relieving corps.

The assist on New York’s impressive bullpen showing has to go to the team’s defense, specifically Judge in right field. The fans “all rise” for him, but he got down to the ground to make two key catches for them. In the third inning, he saved a run by robbing Polanco of a hit right before Nelson Cruz went yard. In the seventh inning, Judge laid out to deny Eddie Rosario extra bases and strand a runner on second.

If Judge doesn’t make that second catch, it’s a 7-5 game that could’ve been destined for a different sort of finish.

When all was said and done, it was the 11th consecutive win for the Yankees over the Twins in the playoffs. That’s what you call a bogeyman.

But don’t count the AL Central champs out yet. Expectations entering the year for the Twins were significantly lower than they were for the Yankees, yet they still managed to win 101 games and set a new MLB record for home runs.

That being said, Baldelli’s boys need to turn things around quickly. The margin for error in a best-of-five series is already minimal, but a deficit here is even more daunting when the only way to overcome it is to overcome arguably the best bullpen in baseball.

Masahiro Tanaka takes the mound Saturday in Game 2. Obviously, Boone and company would like Tanaka to go as long as he can, but even if he can’t, the Yankees are in good hands when they call on the bullpen to come in and control the game.