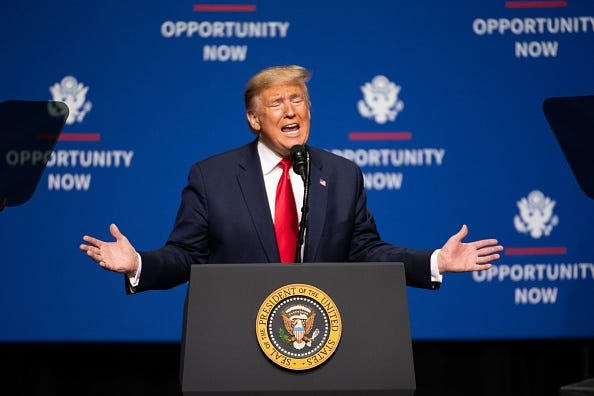 They discussed the upcoming Republican National Convention in Charlotte, background on awarding Rush Limbaugh with the Presidential Medal of Freedom, how and when the President learned of Speaker Pelosi's speech-tearing incident, and his appearance at the NC Opportunity Now Summit at Central Piedmont Community College.

Trump opened up on his impeachment acquittal, touting Wednesday's Senate vote that cleared him of the two charges of abuse of power and obstruction of Congress.

"Impeachment hoax ended and a lot of good things are happening," the president said.

Trump also commented on a much talked-about moment from his State of the Union speech on Tuesday, when he awarded Limbaugh with the Presidential Medal of Freedom.

"I will tell you Rush is the biggest of all time when you think about it," he said. "Nobody can do what he does. From the day I ran, Rush was saying such great things. He was No. 1 by a lot. He went all in, right at the beginning. He agreed with everything I was talking about. Rush, he was just, for me. He’s an incredible guy."

The president expressed concern for the talk radio host, who announced on Monday that he has been diagnosed with advanced cancer.

"He’s going through a rough spell, as you know, he announced with cancer," Trump said on his appearance. "He’s getting treated and hopefully, he’s going to be OK. He is an incredible guy."

Trump also divulged on another controversial moment from Tuesday's speech, when House Speaker Nancy Pelosi tore a copy of his address to the nation behind him.

"I didn’t hear it," he said. "Normally you can hear someone ripping up that much paper. It’s an important document, It was really, she’s not allowed to do it. It’s a criminal event. You’re not allowed to do that. But she is very sad if you want to know the truth. But I didn’t see it. I was looking forward. When I say everybody, a big portion of that room was going crazy, and the other portion sits very quietly and still, a, lot of anger. But success is bringing everyone around."

The president's visit to the NC Opportunity Now Summit comes ahead of the upcoming Republican National Convention, which is set to take place in Charlotte this August.

"I love the state," Trump said of North Carolina. "Charlotte’s been good. They worked really hard to get it. We made this choice."