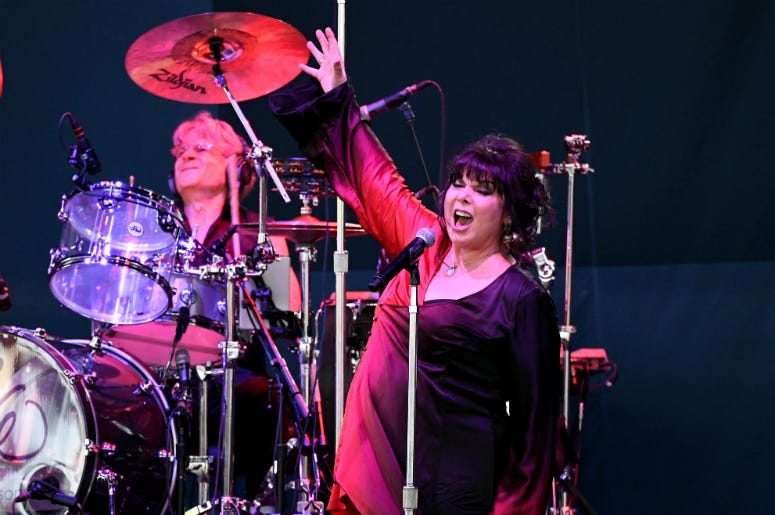 Ann Wilson is telling us more about the songs that inspired her to make Immortal, her new album that pays tribute to music legends lost.

In an exclusive interview with Radio.com last month, the Heart singer told us why she chose Lesley Gore’s “You Don’t Owe Me,” Chris Cornell’s “I Am the Highway,” and “David Bowie’s “I’m Afraid of Americans.”

Wilson is now opening up about the other seven tracks on the album, including why “Luna” might be her favorite Tom Petty song, and why “Back to Black” by Amy Winehouse is one of the saddest songs she has ever sung.

LESLEY GORE “YOU DON’T OWE ME”

"'You Don't Own Me' was originally an early feminist anthem in the 1960's and '70's. Since then the idea of self possession has grown to be more universal...This song is about refusing to be objectified and owned. By anyone."

CHRIS CORNELL (AUDIOSLAVE) “I AM THE HIGHWAY”

"The song is strong, confident, spiritual. It's about a person who refuses to be tied down to the mundane, who is constantly looking for freedom and independence on a more universal scale, not just ordinary everyday reality. It was the cry of a soul, and it's a beautiful song. Chris and I were friends; we had a lot in common, we were both outsiders in a way. He left us with amazing music."

"'Luna' is perhaps my favorite Petty song; it's simple, romantic and aching. The words say, 'Luna come to me tonight...I am a prisoner.' Speaking directly to the moon, as romantics will, there is a desire to be free in the moon's metaphysical power. Free from what or whom? Though it's only reflected light, the soul of the moon has inspired countless lovers, dreamers and existentialists for time immemorial. This song is a classic and I have reimagined it in a sultry, unhurried, southern mood with Warren Haynes on guitar as the voice of the moon."

"A sardonic look at Americans through the eyes of a non-American, David Bowie. I love this little prank of a song, and decided to surround the words with the sounds of the rest of the world that is watching; India, Italy, France, Britain, Asia etc etc etc. The rest of the world, as a tribe, ends up engulfing the self important, superficial, vain, materialistic, lo tech 'Johnny' who, in this song is the stereotypical American. It is not a hate message, but certainly a reality check from an outside perspective. I had fun with this one and hope my fellow Americans will too."

"What are Politicians? They are salesmen...pure and simple. In this old blues grinder by Jack Bruce, I decided to keep it pure and old school. The riff that struts, slinks and slithers throughout this song is as greasy and manipulative as a seduction campaign. Two different guitarists solo on this one; Doyle Bramhall II with his suggestive, slow hand blues moan and Tyler Boley, a progressive brainiac flirting with overheated insanity. The result is a sexy, dangerous game of cat and mouse. I call that politics."

"Leonard Cohen was a poet, songwriter and thinker for the ages. His deeply wrought, soulfully human words hit home in 'A Thousand Kisses Deep.' This is a dip into the existential pool and the climb out again, bathed in the beauty of love when simple youth and sex have deserted the heart. It is a song by a grown-up romantic that will not die. I chose to make it a journey, starting at your corner bar on open mic night...ending far out on the windswept ocean in the consensual, sensual shipwreck of Love's 'Sturm and Drang.' This one I am very proud of. It features my friend Ben Mink on violins that begin in the bar on the Friday night and end up as elemental orchestra deep in eternity. This one is a real good one for headphones, too."

GLENN FREY (THE EAGLES) “LIFE IN THE FAST LANE”

"For 'Immortal' I didn't want to choose just the hits by each artist, but rather those songs that spoke to me the deepest. However, with Glenn Frey and the Eagles, it's almost impossible to not pick a hit. ''Life in the Fast Lane' is the perfect picture of love in the ego-driven, materialistic party culture of the 1970's. This groove is as hot and addictive as the sex, booze, drugs, beautiful, rich young celebs that party 'til dawn every night... 'til the heat is gone, her beautiful face is tired and lined, his energy is spent and the love connection has disintegrated in the chaos. There is a tribal groove here, relentless like a bonfire. This song is for dancers!"

AMY WINEHOUSE “BACK TO BLACK”

"Without a doubt one of saddest songs I have ever sung; right up there with 'The Man That Got Away' (Judy Garland), 'Back to Black' is a real heart-wrencher. This song honestly exposes the pain in an abandoned lover's heart. It talks about humiliation, bravery, inextinguishable hope, desolation and feeling small. I took this out of the casual R&B groove of Amy Winehouse's version and planted it in a deep, dark, gothic garden with high walls. In this environment the words grow luscious and poisonous; saturated with despair...truly black. The marriage of sadness and toxic smoke deranges the lonely lover's heart in this garden of purple flowers."

"The first time I heard this song I was slow dancing with a partner in a crowded club and we were a 'maybe.' The feeling was magical, breathless ; colored lights dissolving in the air like harmonics, incense making the scene even more mystical and a couple of cocktails radiating through my veins. The feeling was almost like falling in love. Anything was possible...and for that moment, the world was crystalline. I painted the canvas of 'A Different Corner' in the watercolors of that feeling. It whispers and delights with those little currents of euphoria and spectral light. The vocals ride on air and tiny bursts of energy charge the heart and mind. This version is pure optimism. You can close your eyes and lie back as if you are in a warm bath. Relaxed...out of the world, in love...maybe."

"Who hasn't dragged their tired soul home after long days of pounding the pavement in pursuit of some dream; when everything has been tried, everyone talked to, everything possible done, your very best, most complete shots taken...yet still there are no takers? Such moments can be incredibly discouraging and depressing. They can also be cathartic. In this version of Gerry Rafferty's classic, 'Baker Street' I wanted to show the power of realization; that one door has closed but another has opened wide. I chose Townsend-like power chords and high rock energy to describe the moment of knowing it's time to go home. Home...ground zero. The natural place to recharge and figure out what comes next, where you are known and loved. Home, the seat of the soul, the true place of peace."