Mötley Crüe has shared their first new song in four years as momentum builds towards the release of their long-awaited biopic. “The Dirt (Est. 1981)” featuring Machine Gun Kelly is one of four new songs the band recorded for The Dirt.

The track announces its presence with a crunchy Mick Mars power chord that echoes until Nikki Sixx moves things forward with a pulsating bassline. Tommy Lee hits as hard as ever as the ingredients to a classic Mötley Crüe song come together, completed by Vince Neil’s trademark vocals. Machine Gun Kelly, who plays Lee in the movie, adds a new element to the band when he comes in with a rap after the second chorus.

“During the filming of our movie we got excited and inspired to write new music,” Sixx said in a statement. “Getting back in the studio with (producer) Bob Rock just fueled the creative fires for us. To me, the music sounds like classic Mötley. The lyrics were written for the movie and are a reflection of our life.”

The track was released alongside a video that features clips from the movie, archival footage, and a peak behind the scenes of the band in the studio and working with the actors who portray them. 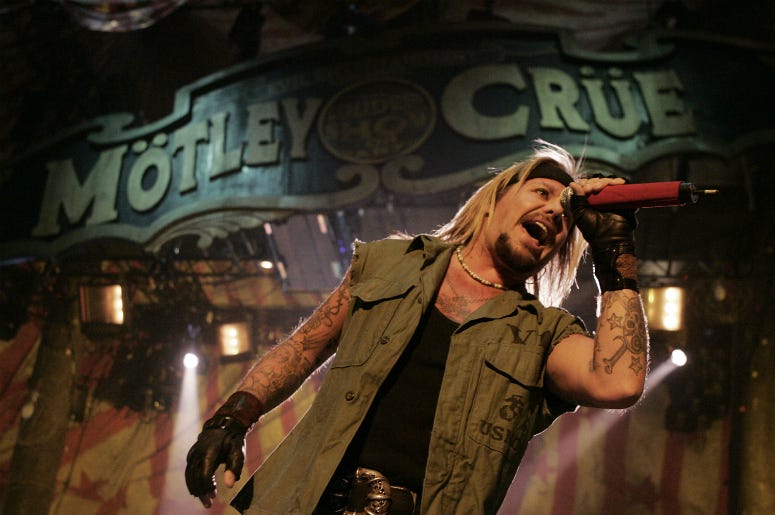 Also just released is the tracklist for the full soundtrack. The other new songs are called “Ride with the Devil” and “Crash and Burn.” There’s also a surprising cover of Madonna’s “Like a Virgin,” although you can see where the band that made a living on sex and drugs might be going with the title.

The other 14 tracks on the album are classic Crüe songs: 5 from their debut album Too Fast for Love, 4 from 1983’s Shout at the Devil, 1 each from Theatre of Pain and Girls, Girls, Girls, and 3 from 1989’s Dr. Feelgood. Check out the full tracklist below and preorder the soundtrack here. It will be released on March 22nd – the same day the movie premieres on Netflix.