The lights go down and the audience starts to roar in anticipation. But it’s not time yet. As Rival Sons walk to the stage - out of sight in the darkness, the sound of a thunderous heartbeat envelopes the venue. The image behind the stage shows a heart pulsating inside the skeleton of the dog from the cover of their new album Feral Roots.

The dog starts to growl as if it senses the uneasiness in the crowd, until singer Jay Buchanan, guitarist Scott Holiday, bassist Dave Beste and drummer Mike Miley finally appear to throw a match into the combustible air. 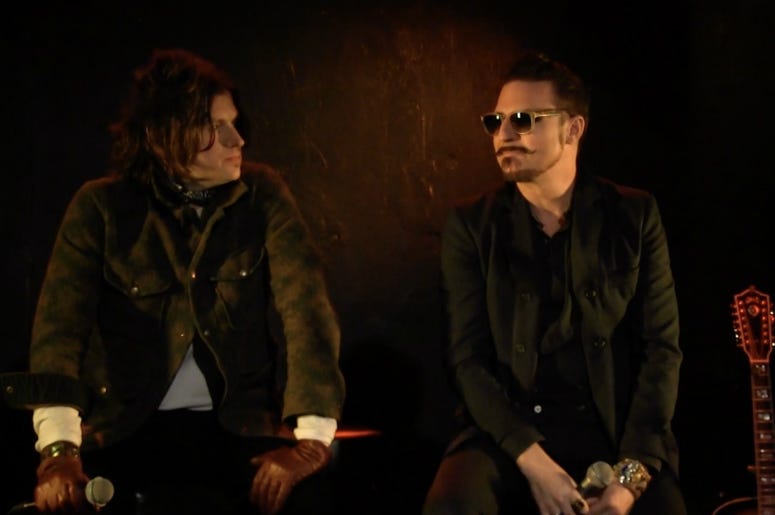 Rival Sons will blow you away in concert, and that’s exactly what they’re trying to do. The intensity of the California rockers’ live shows is captured in their new video for “Sugar on the Bone.”

Buchanan has the stage presence and the look of a classic rock star, and he feels right at home presiding over the mostly 30 and 40 somethings who came to see Rival Sons as if they were on a reunion tour.

"Rival Sons has always been and will always be a live band,” Buchanan told Grammy.com, which premiered the new video. “The studio is great and all but when it comes to playing those songs live, that’s where the danger is and that’s where I want to live."

"People say the audience needs entertainment, and they do," Buchanan continued. "But what the audience really wants is a crucifixion - they want something more vivid and dangerous than the safe bets most of them have made in their lives and we don’t f*** around up there I can tell you that much. Our job is to walk that high wire for them without a net and we do."

Rival Sons have been on the road in support of the new album all spring, but they’re not done yet. They’re heading to Europe before joining Stone Temple Pilots back in North America at the end of the summer. Click here for a list of dates, and check out that dog in the video below.