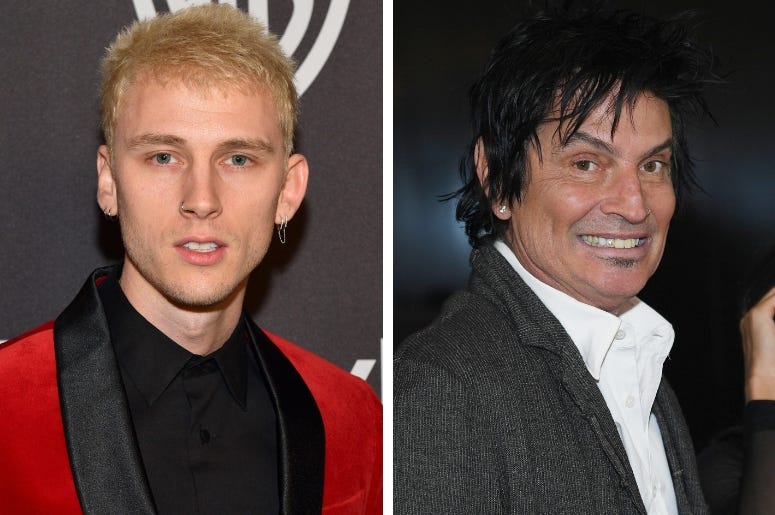 Machine Gun Kelly is dishing the dirt on what it was like to play a wild rock star in the long-awaited Mötley Crüe biopic.

The actor and rapper portrays drummer Tommy Lee in The Dirt, which will premiere on Netflix on March 22nd. Lee is not only an accomplished musician, but was also a tabloid favorite at one point with his tumultuous celebrity marriages to Heather Locklear and especially Pamela Anderson – giving MGK a lot to latch onto.

“Tommy is like the puppy dog of the group,” he told Billboard. “He makes mistakes, but you kind of love him more when he’s making mistakes.”

The Dirt is based on the raunchy book of the same name and has been talked about, rumored or planned for the better part of 17 years. That made it the longest audition ever for MGK.

“Oh, my God, that was, I think, a six-audition process,” he said. “The first two, I was auditioning for Nikki Sixx, and then the last four for Tommy Lee, over the course of two-and-a-half years.”

The Dirt contains numerous stories of the heavy metal debauchery of an up and coming band with a wild side – most of which involved crazy sex and obscene amounts of drugs – so how did MGK get himself in the proper mindset? Nothing too crazy.

“Our first night together in New Orleans,(director) Jeff Tremaine demanded that we (the cast) go out and have beers and really bond,” he said.

The rest of the cast includes Douglas Booth as bassist Sixx, Daniel Webber as singer Vince Neil and Iwan Rheon as guitarist Mick Mars. Look for more on The Dirt and Mötley Crüe on RADIO.COM in the weeks leading up to the big premiere. In the meantime, check out Lee kicking off “Too Young to Fall in Love” on Mötley Crüe’s Carnival of Sins tour in 2005.