The official Hollywood premiere of the long-awaited Mötley Crüe biopic The Dirt took place last night, and fans will finally get to see it rock on Netflix this Friday.

The movie explores how “a runaway, a cute drummer, an old man and a cover band singer” formed an unlikely in-your-face hit-making machine, while making tabloid headlines along the way. It took a special cast to bring Nikki Sixx, Tommy Lee, Mick Mars and Vince Neil to life, and we sat down with the actors and Nikki to find out how they did it.

For one, tattoos are kind of a big deal for Mötley Crüe, but what if you already have a bunch of your own? Before any shooting could begin, rapper Machine Gun Kelly had to be covered in make-up to hide his ink, only to be covered in more make-up to recreate Lee’s artwork.

And when it comes to the Crüe, band members are not afraid to admit drugs were part of their story. A lot of them. So what did MGK, Douglas Booth as Sixx, Daniel Weber as Neil and Iwan Rheon as Mars use for cocaine, heroin, and Jack Daniels on-set? Check out the video above for the answers, along with who the guys say was actually the biggest diva during filming! 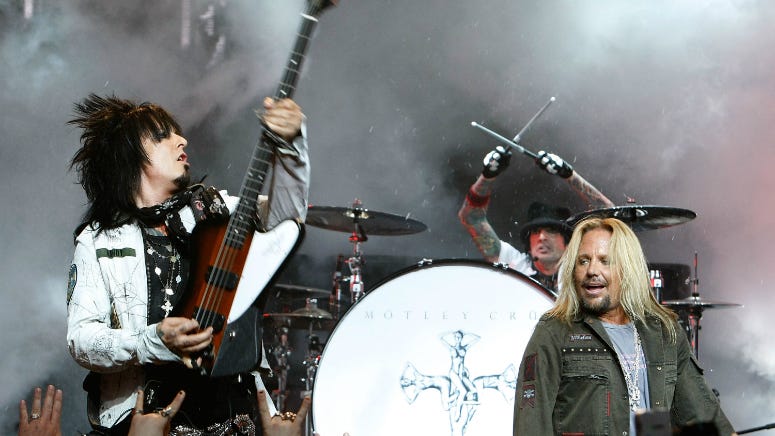 We also had a chance to play a game of “true or false” with Nikki. Find out if he really once cut himself in front of his mom before turning her in below.