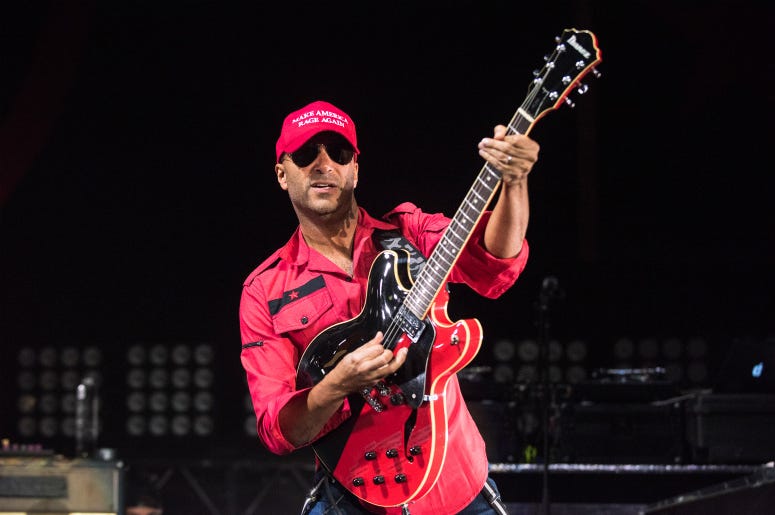 It doesn’t seem like we’ve heard the last from one of the most successful and popular supergroups in rock history. Guitarist Tom Morello says there are unreleased Audioslave songs out there that may eventually see the light of day. He made the revelation during Kerrang’s “In Conversation With Series.”

“There is not a lot, but there is unreleased Audioslave material, which is pretty great, and it will come out at some point,” Morello said. “I don’t know when.”

Morello was asked specifically about the song “Sleight of Hand.” Audioslave played it live, but it never made its way onto an album.

“It was gonna be the first single for Revelations, but then Timmy (Commerford) really hated it cause he thought it sounded like a Danzig song, which is weird,” Morello explained. “And then he yelled f*** you a lot to the head of the label; next thing you know we just said let’s not put it on the record cause we’re about to get dropped.”

Check out a live version of the song here:

Personnel-wise, Audioslave was essentially Rage Against the Machine (Morello, Commerford and Brad Wilk) with Soundgarden’s Chris Cornell on vocals instead of Zach de la Rocha. Audioslave released three studio albums featuring the singles “Like A Stone,” “Doesn’t Remind Me,” and “Original Fire.”

Morello’s focus these days is partly on The Atlas Underground, his collaborative new record that knows no genre.

Get an exclusive look inside the album from Morello himself: