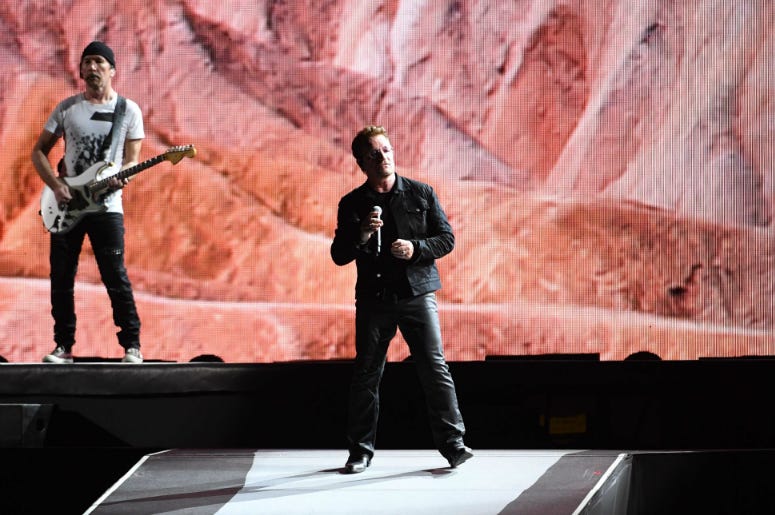 We tried to have a heartfelt conversation with U2 icons Bono and The Edge… where they waxed nostalgic on the first time they each heard themselves on the radio:

Bono recalls KROQ, while The Edge remembers the career-defining moment when "Out Of Control," from their debut album Boy played on Dublin radio. "Whatever doubts I had about the career choice… that was it, I was slain," admits The Edge. Thirty eight years later, Bono proceeds to sarcastically badger his bandmate about his career path – and then the two go on a tangential comedy where they reference both The Simpsons and Family Guy here:

We’re okay with the fact that Bono credited The Simpsons with the 2001 Family Guy episode where Peter Griffin takes his son Chris to the Museum of Irish Heritage to try and get him to connect with his ancestry. Props for laughing at the Irish drinking cliché.

The Edge went to University for only eight weeks. His detour from "running a chemical plant," and becoming the "Mr. Burns of Belgium" has resulted in perhaps the greatest rock and roll chemistry of all time. See for yourself in this exclusive performance of "Every Breaking Wave" from 2014's Songs Of Innocence from the radio.com beach house:

Check back soon for additional U2 exclusives throughout the week, including a performance of "Love Is Bigger Than Anything In Its Way" from Songs Of Experience in the next 24 hours!