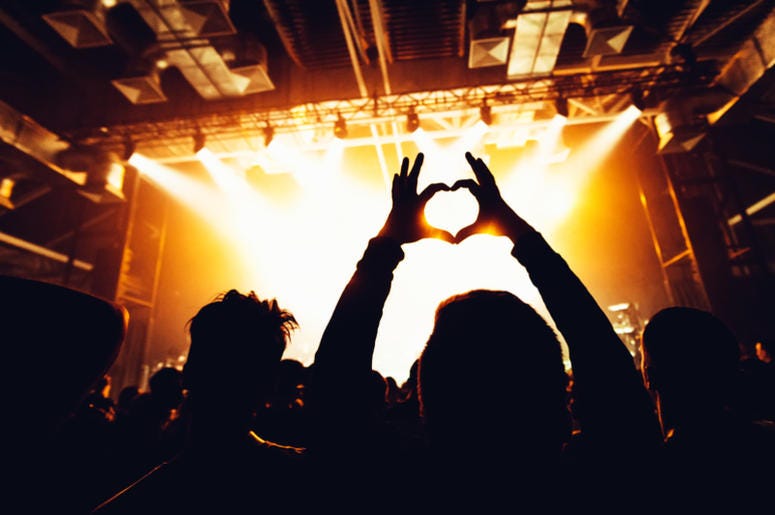 By Mark G. McLaughlin (via WCBS)

What makes a love song great, let alone worthy of being ranked among the five greatest love songs of all time? It is not just the artist or their artistry, or even the lyrics and the emotion with which they are delivered. For most people, it is the song they heard or associate with a individual, a moment or a period of their life and who they were sharing it with – or at least wish they were sharing it with. There are many classic rock ballads and anthems (and even torch songs) that speak of love and longing and heartbreak.

Here, however, and in no particular order, are five works that most people are likely to agree are GREAT love songs, and are at least somewhere in the running for the five GREATEST love songs of all time.

There has always been a connection between the moon and lovers, and this title track on his 1992 solo album draws on that to create an emotional backdrop for this gentle, tender and wonderfully sweet love song. That Linda Ronstadt is doing the backup vocals doesn't hurt, as her soothing voice provides as soft underpinning for Young's higher pitched crooning. Young wrote this as a very personal expression of his lifelong love for his wife, Pegi, who was his partner not only in life but in music as well. Sadly, the two parted in 2014 after 36 years of marriage and Pegi Young passed away on New Year's Day 2019, making this already beautiful song all the more poignant.

There are plenty of sweet, quiet ballads and emotional torch songs that speak of the quiet side of love, but this loud, fast-paced, energetic 1976 screamer by Heart is about the other side of love – the wild, fiery, exciting – and, well, crazy, side of it. Ann and Nancy Wilson do not hold back anything when they perform this song about the desire to be wild, passionate and to, well, “go crazy on you.” Despite the wild rollicking rock riffs of the acoustic and electric guitar pairing, there are other, encouraging, soothing and gentle lyrics in between the chorus that make this more than just a cry to go wild. However, it is of course the chorus, with the plea to a lover to give in to their deepest desires and to unleash their pent up feelings which makes this song unique among love songs. Perhaps that is why it still resonates with lovers today as much as it did more than four decades ago.

U2's Joshua Tree is still considered one of the most important classic rock albums ever made. “With or Without You” is not the only hit song from that album, but it was their first to hit the top of the charts in the U.S. - and with good reason. The heartfelt emotion of its lyrics (and Bono's delivery of them) made this not only their signature song, but a love song for the ages. Bono's lyrics are all about what it means to “give yourself away” to love, the cost that incurs, and how no matter how much you give, you still want to give more – and get more in return. There is nothing simple or sweet about this song – it is about the pain of giving, and giving so much that “I can't live with or without you.”

“I Wanna Know What Love Is” - Foreigner

Foreigner's 1984 “Agent Provocateur” is a memorable album in its own right, but it was this power ballad that really stuck – and continues to stick – in the hearts and minds of longing lovers everywhere. The song is both about the struggle to love and the need to be loved in return. It keeps coming back to climb the charts again and again, with such diverse singers as Mariah Carey and Wynonna Judd (who both released versions of the song in 2003) pouring out their hearts into the microphone. And they were not and will not be the last – for this is indeed a timeless, even if somewhat overly dramatic, paean to love.

“When a Man Loves a Woman” - Percy Sledge

A lot of singers have taken on the challenge of this ballad  but no one has ever been able to match R&B singer Percy Sledge, who brought this song to life in 1987. Although Sledge drew heavily on his R&B, jazz and soul roots, its back and forth tempo has made it a standard on classic rock stations. This is not just about wanting someone to love, or wanting to be loved, but what it really, truly, deeply feels to give everything to the one you love. Johnny Rivers first brought this song to the world in 1967, and Mikael Rockfors covered it beautifully eight years later. They did it justice, but even Michael Bolton, who belted this out again in 1991, somehow just fall short of Percy Sledge, whose rendition is full of the pain and tears and longing that for many make this one of the five greatest love songs of all time.

sports
Heyman: J.T. Realmuto a 'long shot' to sign with Braves
news
Why is a $20 bill with a banana sticker on it at auction for $125,000?
sports
AFC Championship: Buffalo Bills vs. Kansas City Chiefs betting trends and pick
sports
The top 5 free agent quarterbacks in 2021
sports
MLB home run king Barry Bonds pays tribute to Hank Aaron
sports
Greg Maddux says he'd intentionally let hitters have success off him to gain advantage in future at bats