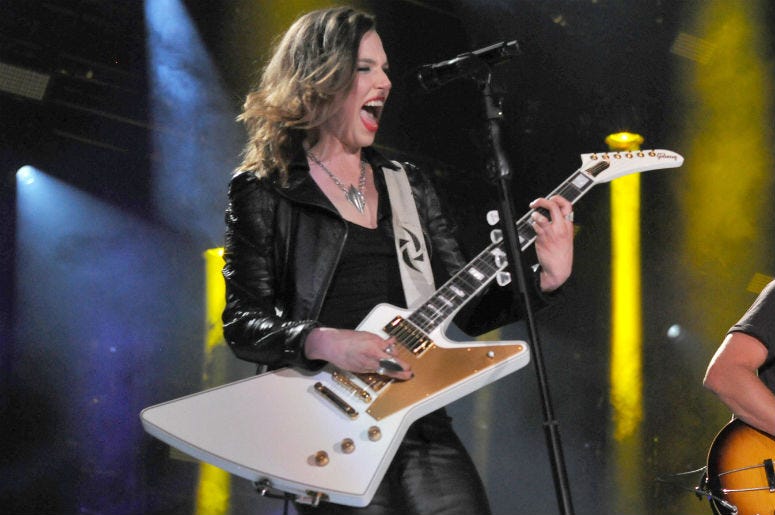 With the recent announcement of their fourth studio album, Vicious, set to drop next month, Grammy Award-winning rock band Halestorm stopped by to talk about their next masterpiece and latest single, “Uncomfortable.” What they didn’t realize was that we would end up chatting about a lot more than that.

Coming off of the first leg of their female-fronted powerhouse tour (which has been extended through the summer), frontwoman Lzzy Hale told us how the lineup of the fierce frontwomen of In This Moment, New Years Day, and Stitched Up Heart came to be.

“It’s something that especially myself and Maria Brink (of In This Moment) have been talking about for years.”

The friends and frontwomen are selfishly (says Hale) always traveling on tour and put this specific tour together to finally give themselves the chance to hang out!

What’s different about this tour than the previous ones? The band told us it seems like there has been a bit of a role reversal. “The girls tell dirtier jokes than the guys,” Arejay Hale admits, “and it’s forced all of us guys on tour to act a little more respectful and clean up after ourselves -- which is kind of nice because we’ve done tours with all-dude bands, and it turns into a sweaty, smelly mess.”

Sounds like the addition of aromatherapy candles and hair products has rubbed off on the guys, as Lzzy happily shares that “the guys are taking more showers.”

And while the band gets a little more in touch with their feminine side, we’ve noticed the fans have too. The female turnout to their shows on this tour has nearly leveled out the once male-dominated audience. (Not to mention, Halestorm has been known to roll out the piano during a section of the show to perform a mean cover of Adele’s “Someone Like You” or Whitney Houston’s “I Will Always Love You,” adding a little element of surprise.) As Lzzy mentioned, there is no greater enjoyment than watching someone in the front row  -- who is the epitome of rock music -- singing along to Adele with a quivering lip.

Vicious, which drops July 27, is available to pre-order here. In the meantime, listen to Halestorm’s “Uncomfortable” on repeat.