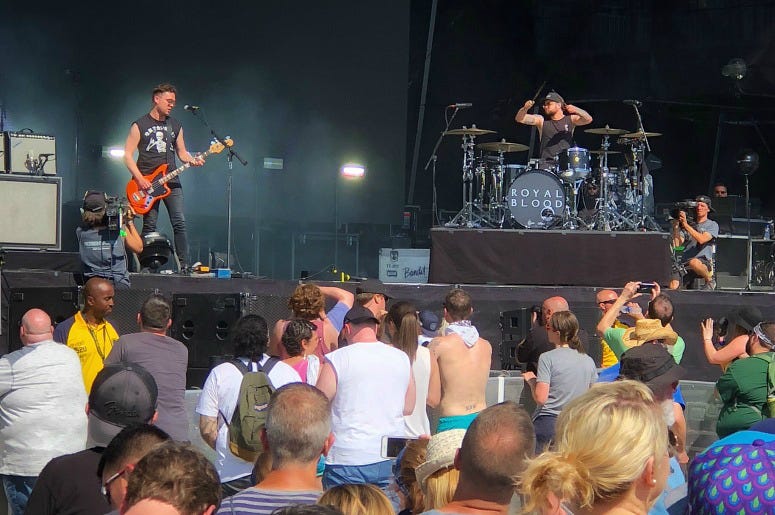 After several weeks traveling on tour, Royal Blood are ready to go home.

"We're at the end of our tether, let me be honest" explains drummer Ben Thatcher. "We've done a good solid two months and this is our last show, so expect Disneyland on its last day." Before one last blazing set at Firefly Music Festival, the "Figure It Out" duo laid out for us their summer plans. It quickly became clear, none of it was real. It starts with soccer.

"On Monday is the first England World Cup game, which is why we've had to stop now because we're both having to travel to Russia to join the squad" offers Ben. "Mike's on the managerial team and I'm third goal keeper."

"We haven't played yet but we're looking great."

We also asked both Mike Kerr and Ben to help us with their favorite festivals around the country. They were nice enough to give us this mostly fictitious top ten list.

9. Cornbury Festival (real and happening next month in the UK with UB40)

8. The Eden Project (actually an indoor rainforest, no known music)

7. Glastonbury (not happening this year)

6. Bunbury (real and played earlier this month in Ohio)

"I think from the times that I've been to it before, I think it's just the diversity of the lineup" explains singer Mike Kerr about the allure of Bloodfest. "There really is something for everyone, and everyone wants something." Also, not real.

Despite a thorough trolling through most of our talk with Royal Blood, there are a few things these guys take seriously. One of those things is hip hop. Ben and Mike both weighed in on the brief beef between Drake and Pusha T this summer. "I'm not into beef, I'm more of a chicken kind of guy" says Ben. "I don't care about that, I care about music. I don't care about who's got a new haircut and who's got their testicles removed. Who gives a s***? Just make good music and put it out." "No one wants to hear a song that's like, f*** you Gary" adds Mike. "Gary gets a hard time." "It's all about f***ing rock and roll and summoning the voodoo, and the spirits" Ben explains.

Royal Blood did just that at Firefly Music Festival, thrashing through an hour plus of riffs and rock, ultimately kicking over their equipment and launching into the crowd. It's a great way to end a few months of work.

Up next for the gentlemen of Royal Blood? Who's to say. We wouldn't believe them if they told us.

Listen to the entire interview below: